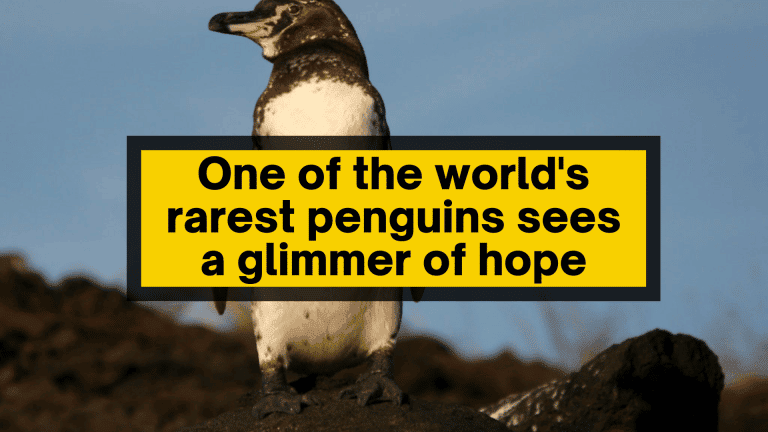 Optimism has grown for the Galápagos penguin, the most endangered penguin species. These adorable creatures are the only penguins found north of the equator. Still, their numbers have plummeted to less than 2,000 in recent years.

A species under threat − why are they the world’s rarest penguins?

The Galápagos penguin is listed as endangered on the IUCN Red List of Threatened Species. This is due mainly to predators and illegal fishing taking the penguins’ food source.

While a standard lifespan is between 15 and 20 years, this is being cut down considerably due to unsafe conditions. The Galápagos penguins seek refuge by burrowing into the ground.

Still, due to the hard ground on the islands, they have resorted to dwelling in the extinct lava tubes in the island’s terrain. However, penguin predators also use these lava tubes, making them a dangerous dwelling place for these endangered birds.

Boersma has dedicated over fifty years of her life to the world’s rarest penguin. In her work, she has acquired funding from National Geographic and the Galápagos Conservancy to work towards preserving the lives of the penguins.

Furthermore, Boersma has used machinery to burrow 120 holes for the penguins to nest in.

These holes are located on areas of the islands where predators are less likely to dwell, making for a safer lifespan for the flightless birds.

There was some uncertainty about whether the penguin population would accept these new nests on the islands. However, Dr Boersma has confirmed that the work was not in vain.

There are indications that they have been used multiple times, which is a very encouraging outlook on repopulation for the species. In a conversation with National Geographic, Boersma stated, “The lives of penguins aren’t so different from our own.

“They raise families and take care of their loved ones. What we humans need to do is protect their habitats so they can thrive. Each one of us can do something to make life better for other creatures”.

The success of this project has shown great hope for the repopulation of the Galápagos penguin. It is hoped that the penguins will continue to inhabit these new manufactured dwelling spaces and stay safe from potential threats.

With some luck, we may see the low numbers of this endangered species rise again.