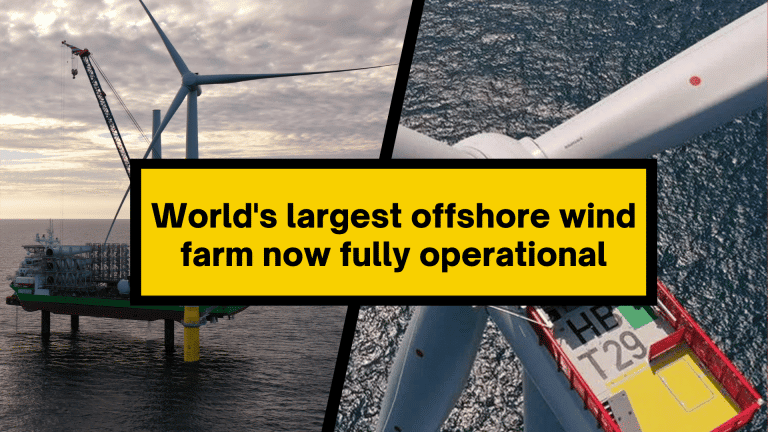 In a massive step forward for the production of renewable energy, the world’s largest wind farm became fully operational this week.

This week, work was completed on the world’s largest offshore wind farm. Thus, marking a huge step forward for the production of renewable energy.

Hornsea 2, located in the North Sea, just 88.5 km (55 miles) off the coast of Yorkshire, can generate enough electricity to power almost one and a half million homes.

Alternative energy sources and renewables are becoming an increasingly large focus of the global energy industry. So, the new offshore is just one of many similar projects planned.

Now that work is completed on the world’s largest offshore wind farm, Hornsea 2 will provide enough energy to power around five per cent of UK homes.

Situated alongside the previous Hornsea 1, which powers around 1.1 million homes, the new project will go a long way to helping the UK Government reach its target of 50 GW of offshore wind energy by 2030.

The Hornsea Zone, where the two wind farms are currently located, is also set to have another addition. Hornsea 3, a 2.8 GW wind farm, was awarded a contract from the UK Government earlier this year.

Ørsted, the company behind the Hornsea project, currently has 13 operational offshore wind farms in the UK. Overall, they provide 6.2 GW of renewable electricity across the UK, which is enough to power seven million homes.

Duncan Clark is Head of Region UK at Ørsted. He said, “Not only will Hornsea 2 provide low cost, clean energy for millions of homes in the UK. It has also delivered thousands of high-quality jobs and billions of pounds of investment in the UK’s offshore wind supply chain.

“We look forward to working with government and industry colleagues to continue to accelerate the deployment of offshore wind for the benefit of homes and businesses across the country.”

Ten years ago, renewable energy made up just 11 per cent of the UK energy supply. Today, that number has increased to over 40%. By 2030, the UK Government aims to reach a 95% low-carbon energy mix across the country.

Work was completed on the world’s largest offshore wind farm this week. However, Hornsea 2 will not hold the title for long.

Construction is currently underway nearby for the Dogger Bank wind farm. The project will power six million homes when it is fully built and is on course for completion next year.

The current global energy crisis has seen a doubling down in efforts to provide alternative resources to gas-fired power stations. Therefore, the completion of the world’s largest offshore wind farm will be welcome news to many.

10 adorable dog pictures that will brighten your day

10 things to be grateful for today