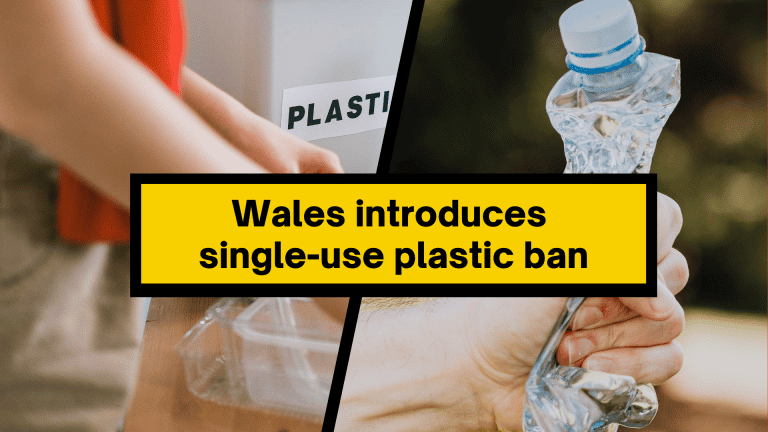 The Welsh government has brought forward a groundbreaking Bill to ban single-use plastics, making it the first country in the UK to do so.

Wales has made a landmark step towards protecting the planet as the country introduces a single-use plastic ban.

The Welsh government introduced the measure in an attempt to reduce the flow of plastic waste that is damaging both wildlife and the environment.

Items such as single-use plastic bags and straws will be among those banned under the new measures brought forward.

Single-use plastic is among the biggest polluters in the world today, detrimentally impacting both the environment and wildlife. Still, many of us continue to use single-use plastic items for convenience without thinking about the impact they are having.

So, to tackle the issue, Wales has introduced a groundbreaking single-use plastic ban set to drastically reduce the country’s plastic waste.

Titled the Environmental Protection (Single-use Plastic Products) Bill, the new law will make it an offence to supply or offer to supply unnecessary single-use plastic products to customers across the country.

Among items banned in the new Bill are plastic bags, straws, plastic plates, cutlery, stirrers, food containers, and cotton buds. Local authorities across Wales will have the power to enforce the Bill.

Wales is the first country in the United Kingdom to introduce such a measure. So, it is expected that Scotland, England, and Northern Ireland will follow soon. In 2021, Ireland banned single-use plastics under the European Union (Single Use Plastics) Regulations 2021 mandate.

Most plastics are made from fossil fuels. So, the Welsh government hopes that introducing this new ban on single-use plastics will assist in efforts to reach net zero and reduce the country’s carbon footprint.

This is not the first time that Wales has spearheaded climate initiatives across the UK. In 2011, Wales was one of the first countries in the world to introduce a charge on single-use carrier bags.

A change to how we live ‒ reducing our pollution

Julie James is the Welsh Minister for Climate Change. Speaking on Wales’ decision to introduce a single-use plastic ban, she said, “This is a big moment in our journey towards a plastic-free Wales.

“Single-use plastic products are often seen littered in our streets, parks and seas. Not only are they unsightly, but they have a devastating impact on our wildlife and environment.

“With a Team Wales effort, we have to say no to the single-use item culture. So, we avoid leaving a toxic legacy of plastic for future generations to deal with.

“By thinking differently, making lifestyle changes and choosing reusable products, we can save money and help fight the devastating impacts of climate change.”

Plastic waste is a huge problem all across the UK. The country’s oceans and countryside face huge amounts of waste that cause serious damage to the environment and wildlife. It is hoped this new measure will help reduce the impact of plastic on the natural world.

Find out more about the initiative here.