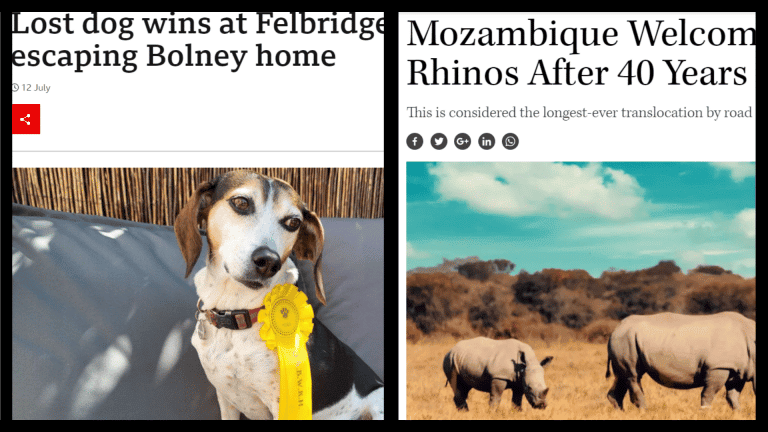 It is easy to feel the despair that comes with most of the news today. But amongst it all, there are rays of hope and positivity. Here are ten happy news headlines from July that will bring you joy.

When reading the news, it can be easy to feel the doom and gloom that often comes with it. And that is normal, as there is a lot going on in the world today that is wrong, unjustified, dangerous, and harmful.

But amongst the despair, there is also a lot of positivity. Be it sport, people, or the climate and world of animals; there are happy news headlines that are sure to tip the scale more favourably. Read on to find out some of the best happy news headlines from July that will bring you joy.

10. A lost pup competes in a dog show and finishes third – a good news story for everyone

Kicking off our list of happy news headlines from July is one that everyone can bask in. Bonnie had escaped her home in Bolney, England and was found by a man on his way to the dog show. The dog ended up claiming the third spot.

Scientists have discovered a new species of giant waterlily called the ‘Victoria Boliviana’. It grows in Bolivia on a single-water basis as part of the never-ending Amazon River system.

It now holds the record as the world’s largest water lily, growing to more than 3m (10ft) wide.

8. Rhinos reintroduced to Mozambique – back after 40 years

Forty years after they became extinct in the country in the south of Africa, rhinos have made a return to Mozambique.

A total of 19 rhinos have been reintroduced to Zinave National Park. It is deemed to be one of the longest-ever translocations by road of rhinos.

The European Union (EU) has brought in ‘landmark’ legislation in regards to Big Tech. The Digital Services Act includes some of the most extensive transparency and platform accountability for big tech firms.

6. Fin whales making a return to the Antarctic – one of the best happy news headlines from July

Massive fin whales have made an astonishing return to the Antarctic, where they were once facing extinction. This is one of the best happy news headlines of this month.

700,000 fin whales were killed between 1904 and 1976. However, the second-largest creature on earth has now made a return to its ancestral home.

In a move designed to be more environmentally friendly, some big alcohol companies have announced plans to introduce plant-based bottles. The companies taking part in the green scheme are Carlsberg, When in Rome and Buen Vato.

One of the best happy news headlines from July is that the Spanish Government is announcing plans to let people travel free on trains.

This is to tackle the major cost of living crisis. From September to the end of December this year, short and medium-distance travel in Spain will be free.

One of the best happy news headlines from July in Ireland is that, for the first time since 2019, full crowds will return this month to Croke Park. Croker is Ireland’s biggest stadium, with a capacity of 82,300.

The All-Ireland Hurling Final has already welcomed back a full-capacity crowd, while the All-Ireland Football Final was a success on 24 July. Ireland’s premier sporting days are truly back.

2. 1,000 acres of forest to be returned to Onondaga Nation in the US – giving back what is owned

The Onondaga Nation from New York is set to regain over 1,000 acres of ancestral land in the heart of New York. This is one of the biggest returns of land to an indigenous nation and is a move to be welcomed.

The move includes the transfer of the headwaters of Onondaga Creek, 45 acres of wetland and 980 acres of forest and fields.

1. NASA telescope goes further than ever – realizing how small we really are

Anyone with a social media presence would have seen the remarkable images released by NASA, where they went the deepest we have ever seen into the indefinite universe that we are part of.

The James Webb Telescope has revealed the thousands of galaxies that exist in the universe. It also revealed the clearest photo of Jupiter we have had to date.

10 happiest animals in the world