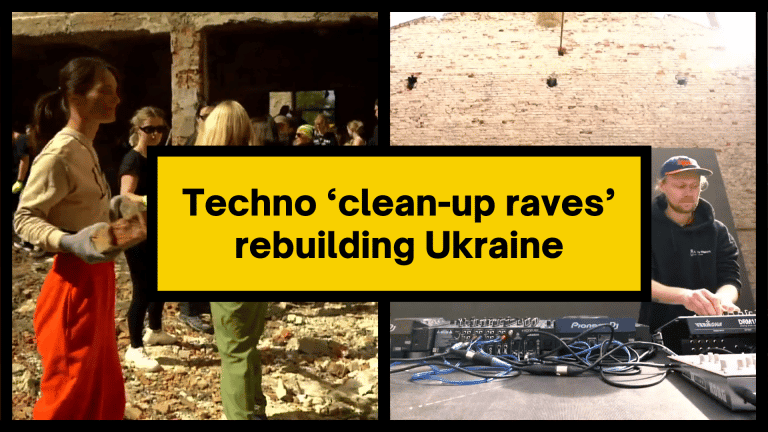 Ukrainian techno fans are uniting their love of raving with their desire to restore buildings bombed during the Russian invasions.

Repair Together is a volunteer initiative behind the so-called techno ‘clean-up raves’ that are working to rebuild Ukraine.

Towns and cities across Ukraine have been virtually flattened as a result of Russian shelling and missile attacks that have taken place throughout this year.

Combining their love of electronic music with their desire to rebuild destroyed buildings and premises throughout the country, techno lovers from across Ukraine and further afield are coming together to rave and rebuild.

Repair Together was set up in May of this year, when the region of Chernihiv was liberated from Russian occupation.

With the aim of assisting those most affected by the Russian invasion, the initiative aims to restore towns and villages that have been the victims of Russian attacks.

Having hosted various clean-up initiatives that focus on cleaning, reconstruction, and targeted assistance, hundreds of volunteers have signed up to help the cause.

Now, Repair Together has launched a series of techno ‘clean-up raves’ to not only help rebuild Ukraine. Rather, they also bring people together through their love of music.

Explaining the idea on Instagram, Repair Together writes about how they are “bringing life back to where it was tried to be destroyed.”

They continue, “We believe that youth can unite and stand together against any obstacle around the world. We have experience, rocks, cool music, and, most importantly, desire.”

Through the unusual rebuilding initiative, Repair Together hopes to draw the attention of the global media, western funds, and institutions to restore important cultural institutions across Ukraine.

All to the beat of techno music, volunteers have come together with their tools to rebuild schools, universities, and important cultural buildings that were destroyed.

The power of working together ‒ plenty of progress has been made

So far, Repair Together has hosted nine techno ‘clean-up raves’ in three villages across Ukraine. Offering a distraction from the pain and horror that surrounds them and a more joyful way to assist in the rebuilding efforts, these events are uniting young people across the country for a single cause.

Aside from restoring these culturally important buildings, Repair Together is also working to rebuild homes that were destroyed during Russian attacks. Next, they plan to build 12 houses in the nearby town of Lukashivka before the winter sets in.

Dmytro Kyrpa is the founder of Repair Together. Speaking to the zagoriy foundation, he explained what the initiative is all about. “We started with our own desire to help, and in the process, it turned out that there are many people like us.

“The initiative is growing at a crazy speed, and dozens of new people join us every trip. Everyone is very proactive. We never once had to force anyone to work or explain why it is necessary.”

Letters Against Isolation: battling loneliness one letter at a time