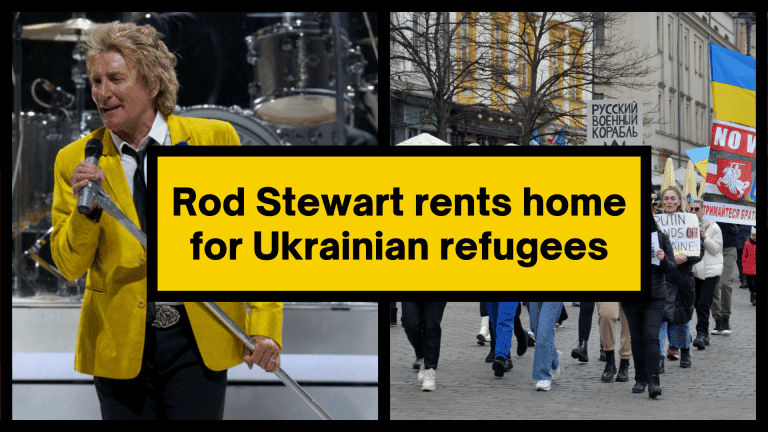 Sir Rod Stewart is best known for his hit songs and unique style. However, the British rockstar is using his influence for good as he offers a helping hand to those in need.

Sir Rod Stewart has been widely praised as he revealed he is renting a home for Ukrainian refugees.

Feeling heartbroken as he watched the impact of the Russian invasion on the lives of ordinary Ukrainian people forced to flee their home country, Stewart felt he had to do something to help.

Hoping to inspire others to help Ukrainian refugees in the UK, the British rockstar revealed that he normally likes to keep his charitable acts on the down low.

Doing something for those who need it most ‒ giving back

Speaking to the Daily Mirror on his decision to rent a home for Ukrainian refugees, Sir Rod Stewart said, “Words couldn’t describe what we were watching.”

He continued, “The bombing of innocent children, the bombing of hospitals and playgrounds. Like everyone else, we were completely beside ourselves. I don’t wish that on anyone. This is evil, pure evil.”

Horrified by the news coverage of the Russian invasion of Ukraine, the British rock icon felt moved to do something to help the innocent people impacted by the crisis.

Using his power for good, Stewart decided to support Ukrainian couple Rostyslav and Olena and their five children. To do this, he is renting, furnishing, and paying the bills of a Berkshire home for them to live in for at least a year.

Seeing how grateful the family were for this act of generosity, Stewart explained that he wants to do more. He told the Daily Mirror, “It just makes me want to do more. I am thinking of getting another house now and getting a lot more people over”.

Since the invasion, many families and innocent people have been displaced and made homeless. So, it is more important than ever that those who can do their best to help those in need.

Hoping to inspire others ‒ the role of a knighthood

Sir Rod Stewart explained his reasoning for being open about his choice to rent a home for Ukrainian refugees. Normally keeping his charitable acts away from the public eye, he said he hoped to inspire other people across the UK to help those in need.

He said, “I usually keep all my charitable efforts nice and quiet and just do it. But I thought, ‘I am a knight. I have been given this knighthood because of the things I’ve achieved in my life and the charity work I’ve done over the years’.

“But that was the past; I want to be seen to be doing something now. I am a knight; I should be using my power to do something for people.”