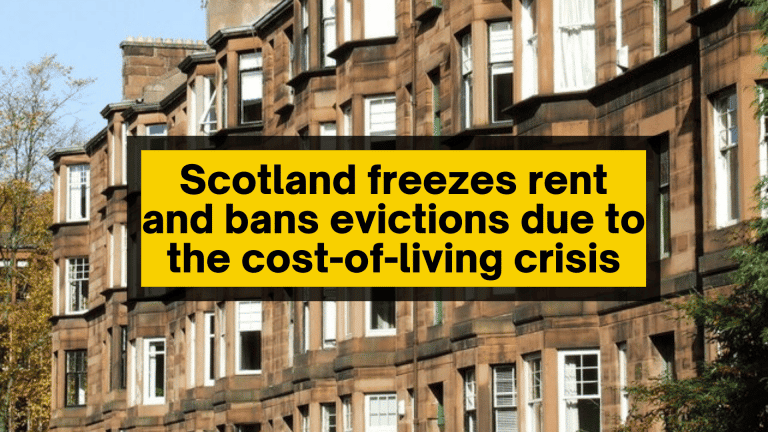 Scotland takes a strong stance against the cost-of-living crisis by boldly moving to freeze rent and ban evictions.

Recently, the Scottish Government announced a package of measures aimed at aiding renters during the current cost-of-living crisis.

The measures will reduce the hardships tenants face while also creating breathing space for those who find themselves in dire straits.

The most high-profile of these policies revealed is certainly the plans to place a rent freeze on landlords whilst also banning the eviction of tenants until at least the end of March 2023.

A report carried out this year described Scotland as having a “chronic housing shortage” as it found a shortage of approximately 100,000 new homes.

The industry body, Homes for Scotland, which conducted the report, said the lack of available housing was because of a “consistent undersupply” for the past decade.

This scarcity of houses has further exacerbated the increase in house prices, which has adversely affected the overall amount of private rental properties on the market as many landlords have resorted to selling their properties instead to make the most of the current high prices.

With the demand outstripping the supply, the rental prices have continued to rise and appear as if they will continue to do so if left unchecked.

Dealing with the cost-of-living crisis – package of measures

As mentioned above, the main measures involved in dealing with the cost-of-living crisis proposed by the Scottish Government are the plans to introduce emergency legislation to freeze rents for both private and social renters and to ban evictions until at least March 2023.

It is hoped that implementing these two measures, in particular, will help protect tenants and ensure they can survive the cost-of-living crisis without having to deal with the threat of eviction hanging ominously over their heads.

There has been quite a mixed reaction to the emergency legislation since the announcement, with strong feelings on both sides.

Representing the tenant’s point of view, the tenant’s union, Living Rent, called the proposed rent freeze a “massive win” that will support renters during these turbulent times.

They also while also note that as rents are “already too high”, further rent controls will be required to reduce the overall level of rent in the future.

On the other hand, the Scottish Association of Landlords complained that the emergency legislation was another example of the Scottish Government “attacking landlords for political reasons” and accused the Government of failing to “grasp the reality of Scotland’s housing crisis”.

While what effect the emergency legislation will have remains to be seen, it shows that, on some level at least, the Scottish Government has acknowledged that there are a lot of problems currently with the cost of living that need to be solved to improve people’s quality of life.