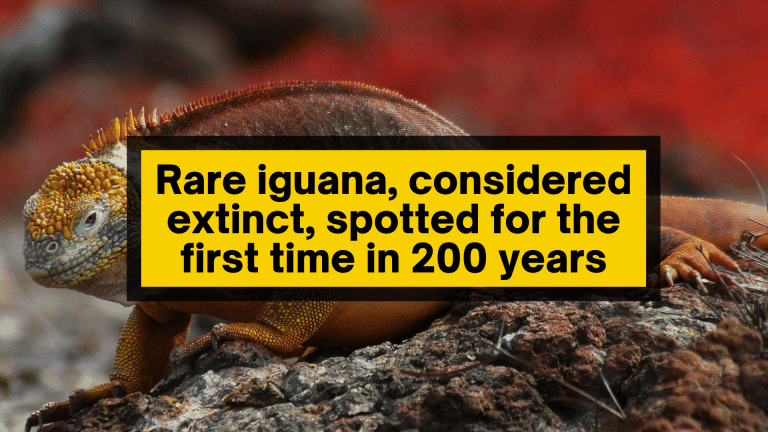 A rare iguana previously considered extinct was miraculously spotted for the first time in 200 years.

After being thought to be extinct, a rare iguana was spotted, to many people’s surprise. To make things even better, it also appeared to be successfully reproducing on the same Galapagos Islands from which it was said to have disappeared from over a century ago.

This was, of course, seen as good news for the Ecuadorian government and for animal conservationists across the world.

Land iguanas – back from the brink

After a century since their supposed disappearance, Iguanas were again spotted on Ecuador’s Galapagos Archipelago.

They seem to be experiencing a rejuvenation as they were also spotted to be actively reproducing, which is an excellent sign for the species’ survival.

According to a 1903-06 mission to Santiago Island by the California Academy of Sciences, the land iguana from the Conolophus subcristatus species, which is one of three on the island, had apparently vanished from the region in the early 20th century.

When the environment ministry of Ecuador announced that the land iguana, which was believed to have been extinct, was now naturally breeding on the Galapagos Islands, it was the cause for much joy and celebration.

The revival of the Pacific archipelago – a very important region

As part of the attempted revival of the Pacific archipelago region, the Galapagos National Park (PNG) authorities have reintroduced over 3,000 iguanas from a nearby island.

The Galapagos Islands are located approximately 1,000 kilometres off the coast of Ecuador and is a region which was first made famous by Charles Darwin, a British naturalist and geologist who made his renowned evolutionary studies on them which helped him earn much fame.

In 1835, Darwin discovered a huge population of iguanas in Santiago. Besides being home to many exotic animal species, the Galapagos islands are also home to many rare plants and are nowadays regarded as a Natural World Heritage site.

The resurgence of the iguana species – hope for a better future

Galapagos National Park director, Danny Rueda, spoke about the momentous importance of the resurgence of the land iguanas when he said, “187 years later, we are once again seeing a robust population of land iguanas with adults, youngsters, and newborns.

“This enhances our hopes for restoration on the islands that have been severely impacted by introduced species and is a fantastic conservation accomplishment”.

It is the hope now by locals, the Ecuadoran government, and animal conservationists the world over that this marks the start of a better and more sustainable future for the land iguana species and one which see them thrive and increase their numbers well into the foreseeable future.