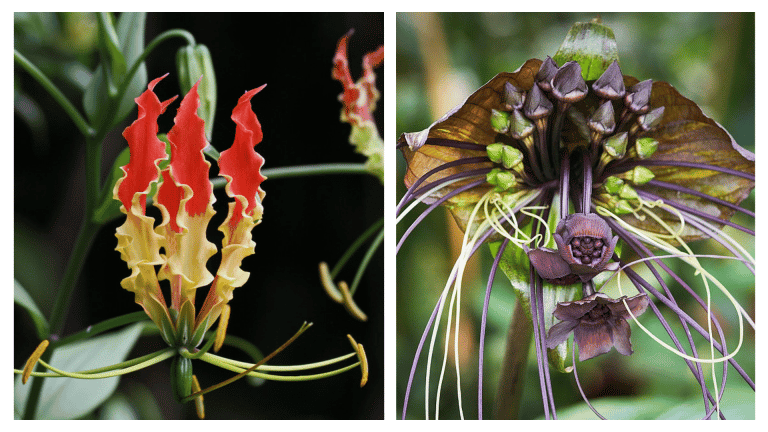 You might not have seen or even heard of some of the most rare flowers in the world. Let’s take a look at ten of these lesser-spotted beauties.

Beautiful flowers are found all over the world. However, some are more common than others. You might have heard of these unusual flowers, or they might be brand new to you.

Purple flowers, Pink flowers, yellow flowers and more, let’s take a look at some of the most rare flowers in the world and just what makes them so special.

10. Chocolate cosmos – the name comes from the smell

The chocolate cosmos is one of the rarest flowers in the world. Native to Mexico, it has been extinct in the wild for over 100 years.

It’s a beautiful, dark-red, bowl-shaped flower with velvety smooth petals that smells of vanilla and hot chocolate, hence the name.

Ghost orchids are rare flowering plants that rely on very humid and marshy wetland habitats. This is why they are only known to live in South Florida and Cuba and why it’s so hard to cultivate outside their natural habitat.

This plant is white, spidery and wispy in appearance; this is where it gets its ghostly name from. The epiphytic plant’s wispy roots get nutrition from the plants it grows on.

Native to Sumatra, the corpse flower has had a declining population in the last 150 years due to logging and converting the plant’s native habitat into palm oil plantations.

The flower, whose botanical name is the titan arum, get’s its unfortunate nickname because of its deathly smell when it is in bloom.

The sickly odour, said to resemble rotting flesh, is produced to attract pollinators that feed on flesh.

The black bat flower is very rare in the wild, and people like to cultivate this particular flower for its unique features.

It is certainly one of the most unique flowers you’ll ever see, with large dark leaves and seed pods that make it look like a face, some say a bat’s face. It grows best in a semi-tropical environment and is native to both forests in Asia and Australia.

6. Youtan Poluo – one of the most delicate flowers in the world

Often mistaken for lacewing eggs, Youtan Poluo is one of the rarest flowers in the world. They are extremely dainty and delicate and are believed to bloom once in 3000 years, marking the reincarnation of Buddha.

The local name for this flower is Udumbara. In Sanskrit, this means auspicious flower descending from heaven. The flower is known to excrete the distinct smell of sandalwood.

5. Tropical pitcher plants – one of the rarest plants in the world

Nepenthes Tenax, or tropical pitcher plants, often produce flowers referred to as “blood-cups” because of their shape and deep red colour.

It is a lowland species of tropical pitcher plant native to northern Queensland, Australia. It’s certainly one plant to keep your eyes peeled for.

4. Night-blooming cereus – only flowers once a year

While the plant itself isn’t rare, this one is on our list of the most rare plants in the world because it only produces flowers one night a year.

It produces white flowers that are star-shaped and beautiful and seeing them bloom just one day of the year is something you don’t want to miss.

Given its name from the ballet-shoe shape, the lady’s slipper orchid is a beautiful, delicate flower. However, don’t be fooled by its delicate qualities, as it is actually moderately poisonous.

They are one of the rarest flowers in the world because they don’t bloom every year. In fact, once it has germinated, it can take years before the lady’s slipper first blooms.

The gloriosa lily, or flame lily, makes a statement wherever they are. They have bright, bold colours and a unique shape.

These exotic flowers are native to tropical and southern Africa to Asia and are naturalised in Australia and the Pacific. The flower is also commonly cultivated.

1. The Middlemist’s red camellia – one of the most rare flowers in the world, if not the most

The Middlemist Red camellia is considered the rarest flower in the world. The plant was brought from China to England in 1804 by John Middlemist.

Only two samples of this flower exist in the world today, one in New Zealand and the other in England. Resembling a rose, the geometric ascending circles of petals give it its unique look.

Jade Vine: Strongylodon macrobotrys, or Jade vine, is known for its striking cascades of beautiful blue-green blooms. The vine is extremely rare in cultivation.

Black orchid: While people often search for black flowers and black orchids, it is an impossible colour for orchids to naturally blossom in.

Rothschild slipper orchid: This flower is so rare; it actually goes for thousands on the black market.

White American waterlily: This star-like aquatic plant is dying out in native parts of the US. It has bright yellow stamens in the centre that make it stand out amongst its white leaves.

It is said that there is a rare black rose that grows in Turkey. However, no other naturally-black roses have been discovered elsewhere in the world.

What is the rarest flower in the world in 2022?

It’s a toss-up between the Middlemist’s red camellia and the corpse flower. While the former is often referred to as the rarest flower in the world, as of 2022, there are only 1,000 corpse flowers left in the wild.

What is the most forgotten flower?

For a long time, the Scabiosa flower was often forgotten. However, avid gardeners from years ago will certainly remember them.

10 adorable dog pictures that will brighten your day