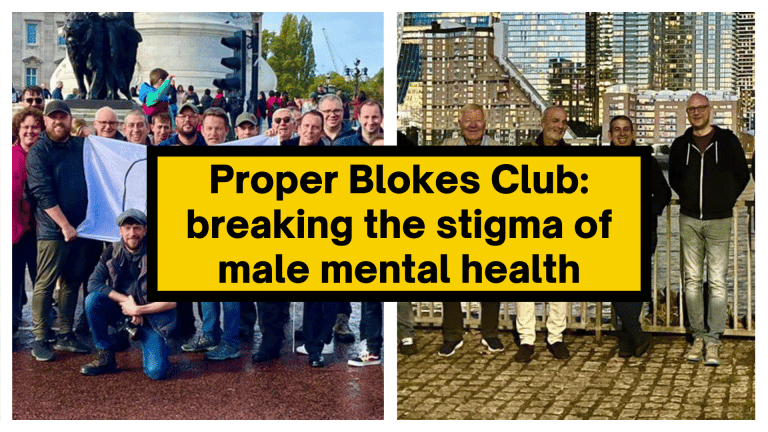 The UK has seen an epidemic of male mental health issues in recent years. Currently, around one in eight men in England have been diagnosed with a common mental health problem.

The Proper Blokes Club is a fantastic initiative set up by one man on a mission to break the stigma around male mental health.

A simple idea, the community project is based around giving men the opportunity to get out together to walk and talk. A much-needed relief in a society that often tells us to keep a stiff upper lip.

Offering men the chance to open up and talk about the struggles they’re facing in a welcoming and non-judgemental environment, the initiative has proven popular all around London.

The power of community ‒ open to everyone

The Proper Blokes Club was set up by Scott Oughton-Johnson, who had struggled with his own mental health for almost a decade.

After bottling up his own struggles and anxieties for so long, one day, Oughton-Johnson decided to go for a walk. It was from here that his idea for the Proper Blokes Club was born.

Speaking to The Guardian, he explained how separating from the mother of his children and the subsequent custody battle took its toll on his mental health. He said, “I was in and out of court for the best part of ten years.

“It was a nightmare. I bottled it all up. People would say, ‘I don’t know how you do it.’ But inside, it was terrible. The stress and anxiety were killing me.”

Speaking to his GP, Oughton-Johnson was offered a course of cognitive behavioural therapy on the NHS. However, due to underfunding, they can only offer a limited number of sessions before you have to deal with things for yourself again.

Taking matters into his own hands, he decided to reach out to other men who might be feeling the same. With this idea, he started a public Facebook page.

Here, he uploaded a video of himself talking about his own mental health struggles. In the video, he invited other men who might be feeling the same to join him for a walk.

On his first walk with the Proper Blokes Club, only one other man turned up. Disheartened at first, Scott decided not to let the low response get to him. Then, the next week, two more men showed up, and from there, the community just kept getting bigger and bigger.

Now, walks take place every day from Monday to Thursday at various locations throughout London. Each night, anywhere between five and 50 men might turn up.

Not only does the Proper Blokes Club offer men of all ages and from all walks of life the opportunity to meet up and talk about their mental health. Rather, it also allows them the time to exercise, make new friends, and practise mindfulness.

The website states, “Exercise has been a proven way to help people with any sort of mental health issues by releasing endorphins that make you feel good about yourself. Walking is free, so it makes a great way to start and gets you out in the fresh air.”

Currently, the initiative is only taking place in London. However, as it continues to grow, we can see it taking off in locations all around the UK ‒ and the world.