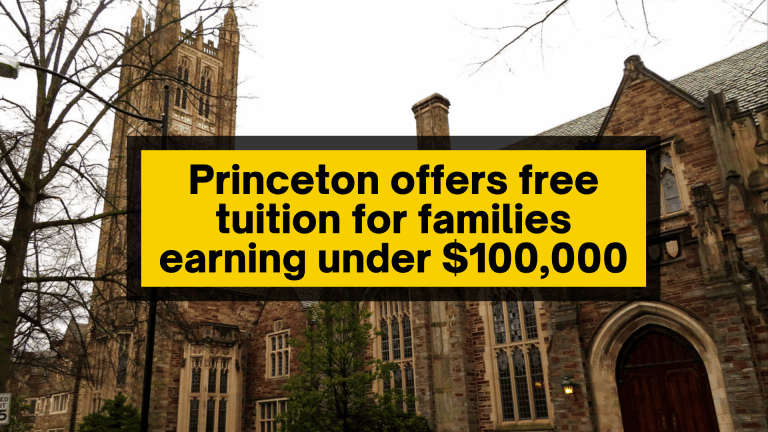 One of the most prestigious universities in the United States, Princeton University has made the landmark decision to offer free tuition to students whose families make less than $100,000 per year.

However, attending an Ivy League university can seem like an unattainable dream for students whose families can’t afford to cover the extortionate cost of tuition.

However, in a brand new initiative, New Jersey’s Princeton University is offering free tuition for families earning under $100,000.

According to Princeton’s website, a full year of tuition at the prestigious Ivy League university costs a whopping $80,000.

With the average American bringing home an income of $31,133 per annum, even students with two full-time working parents supporting them will struggle to cover the cost. Up until this week, only families earning less than $65,000 per year received full financial aid coverage.

Now, as Princeton offers free tuition for families earning under $100,000, 25% of the university’s undergraduates will now receive financial aid to cover the full cost of tuiton, room, and board.

According to a news release from the university last Thursday, the new financial aid programme will now assist families earning up to $150,000.

These changes continue Princeton’s dedication to being a national leader in financial aid to help families across the United States struggling with rising costs.

Speaking on the changes, President Christopher L. Eisgruber said, “One of Princeton’s defining values is our commitment to ensure that talented students from all backgrounds can not only afford a Princeton education but can flourish on our campus and in the world beyond it.”

He continued, “These improvements to our aid packages, made possible by the sustained generosity of our alumni and friends, will enhance the experiences of students during their time at Princeton and their choices and impact after they graduate.”

Helping students through university ‒ a step in the right direction

University education should not be exclusively for those from high income families. So, Princeton’s decision to offer free tuition for students from families earning under $100,000 is a huge step in the right direction.

Unfortunately students starting university this year will miss out on these benefits for their first year. However, the new financial aid policies will be offered to all undergraduates starting in autumn 2023.

Other changes brought in include the scrapping of the $3,500 student contribution earned through summer savings and campus work. This change is hoped to allow more students the opportunity to study abroad or pursue extra-curricular activities.

Dean of the College Jill Dolan said, “Princeton’s generous financial aid program has transformed the socioeconomic diversity of our undergraduate student population, allowing more students from across backgrounds to learn from one another’s life experiences.”