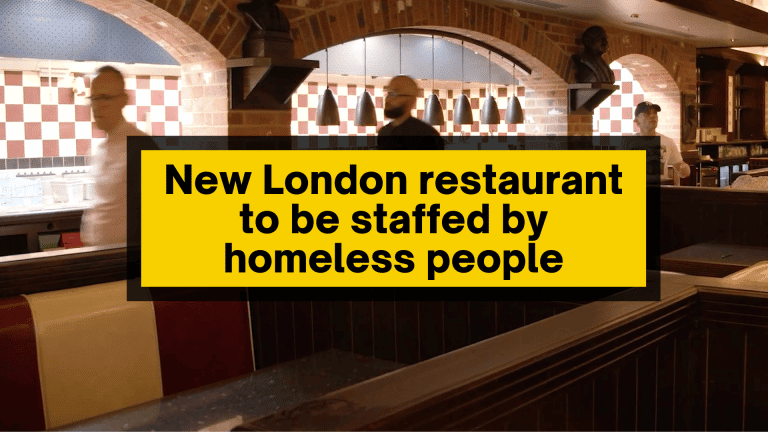 With a staffing crisis across the hospitality industry and a rise in homelessness across the UK, a brand new pop-up restaurant is seeking to solve two issues with one initiative.

An exciting new pop-up restaurant has opened in London to upskill homeless people, offering them a chance to start a career in hospitality.

London’s hospitality industry is currently facing a huge staffing crisis and homelessness is on the rise across the UK. So, the pop-up restaurant is seeking to alleviate these two issues with the exciting new initiative.

Headed by Michelin-starred chef Adam Simmonds, who has worked in some of the UK’s best kitchens, the pop-up restaurant will open to upskill homeless people.

Currently, there are around 400,000 vacancies in pubs and restaurants up and down the United Kingdom that businesses are struggling to fill. So, the brand new initiative seeks to offer a solution to that problem while also providing an opportunity for people experiencing homelessness.

Working alongside Soup Kitchen London, Simmonds will offer 16 people experiencing homelessness the chance to partake in a three-week crash course in cooking. From there, they will complete a 13-week working stint at the new pop-up restaurant Home Kitchen in London.

With the cost of living rapidly on the rise and mortgage increases forcing many people out of their homes, the issue of homelessness is increasing across the UK.

The sad news is that, according to a report by homelessness charity Crisis, almost 50 per cent of businesses would fire an employee who lost their home. Similarly, 58 per cent said that this would negatively impact a person’s chances of getting hired.

In order to break the cycle, the brand new pop-up restaurant is offering those experiencing homelessness the chance to earn a wage and gain valuable skills by working under one of the UK’s leading chefs.

The brand new pop-up restaurant will not only upskill homeless people by offering them a chance to work in a fast-paced restaurant environment. Rather, they will also earn a London Living Wage, be provided with a Travel Card, and leave their placement with a City and Guilds qualification.

This experience will help them go on to make a career in the hospitality industry. Therefore, offering them the chance to escape the vicious cycle of homelessness and start a new life.

Once open, Home Kitchen will take over a former Frankie and Benny’s site in London’s Victoria Station. To cover wages, the cost of sponsoring qualifications, and food and drink stocks, Simmonds has set an ambitious crowdfunding target of £450,000.

In the meantime, London Rail is holding the site at Victoria Station while the project raises funds. You can donate to Home Kitchen here.