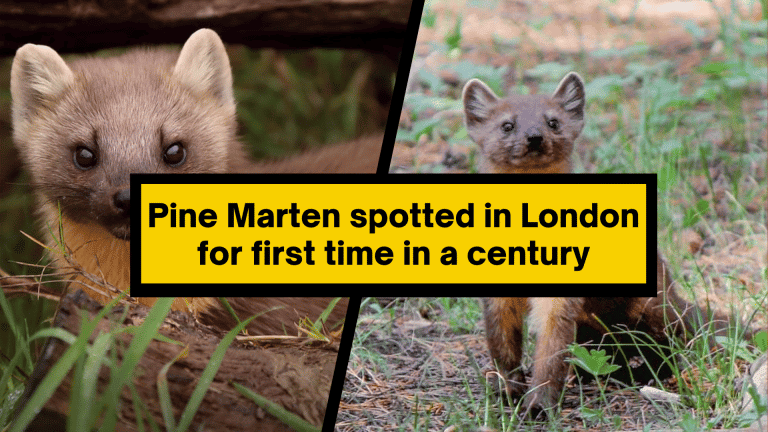 The endangered animal was caught on a Zoological Society of London camera used for hedgehog conservation in the area.

An endangered pine marten has been spotted in London for the first time in over 100 years.

The pine marten is a mustelid or carnivorous mammal in the same family as animals such as weasels, badgers, otters, ferrets, and more.

It was believed that there were no pine martens remaining in southern England after the animal was not spotted in the region for over a century.

The mammal is native to and widespread across most of Europe, Asia Minor, and the Caucasus.

However, the pine marten was driven to extinction across England over a century ago. That was until the animal was spotted in the country for the first time in over 100 years in the Shropshire Hills back in 2015.

Since then, experts have believed that the pine marten was confined to Scotland and northern England, with the only sightings occurring across these regions. However, that all changed this week as the pine marten was spotted in London for the first time in over 100 years.

Conservationists in London got quite a surprise when they spotted a pine marten on a camera set up to track hedgehog activity earlier this week.

Cameras installed by the Zoological Society of London (ZSL) as part of the London HogWatch project caught sight of a pine marten in a woodland southwest of the city.

Kate Scott-Gatty, a research assistant for ZSL and London HogWatch, spoke to The Guardian about the unexpected sighting earlier this week. She said, “As part of our ongoing hedgehog monitoring work, we deploy camera traps across woodlands.

“In this area, these are usually set off by the movement of common species such as foxes and badgers. So, you can imagine our surprise at seeing a pine marten – a species usually only glimpsed in Scotland and northern England.”

After the pine marten was spotted in London for the first time in over 100 years, camera operators for ZSL said they would continue to keep an eye out for signs of the species in the area.

A century ago, gamekeepers targeted the pine marten because it fed on game birds. It was because of this that the species was driven to extinction across the country.

However, in recent years, the pine marten has been reintroduced to areas across England. For example, they were sighted in Northumberland back in 2018 and reintroduced to the Forest of Dean, Gloucestershire, in 2019.

Further reintroduction efforts are planned for areas such as Exmoor and Dartmoor.