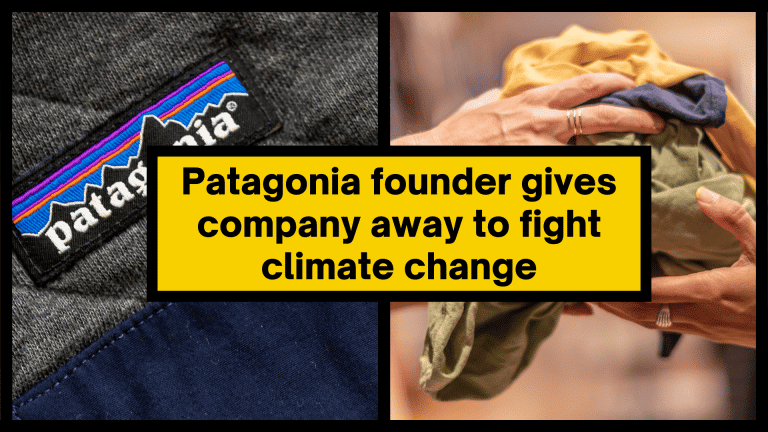 The outdoor fashion brand has long been known to show concern for the environment. However, this is their biggest sustainability move yet.

Patagonia founder Yvon Chouinard gives the company away to fight climate change in the brand’s biggest sustainability move yet.

Founded in 1973, Patagonia has long been a forerunner in sustainable and climate-conscious fashion. Thus, the brand accumulated a massive following among those concerned about their environmental impact.

Now, the Patagonia website reads, “Earth is now our only shareholder,” as the company’s founder hands over the profits to a charitable trust.

Fashion is often regarded as one of the least sustainable industries, with fast fashion brands churning out huge numbers of products without concern for their environmental impact.

This is where Patagonia stood out from the crowd. Since its inception in 1973, the outdoor clothing brand’s founder Yvon Chouinard has ensured that sustainability has been at the forefront of all they do.

Brand values such as guaranteeing its clothes are for life and offering affordable repairs have made Patagonia popular among those wanting to minimise their environmental impact.

It is undeniable that climate change is one of the major challenges facing our planet right now. It is something that will negatively affect us all if we don’t act now to change our behaviours.

In perhaps his biggest initiative yet, Patagonia’s founder has given away the company to fight climate change. He said that any profits not reinvested in running the business would go to a charitable fund.

He claimed that the profits donated to the climate cause would amount to around $100 million (£87 million). However, this would be dependent on the health of the company.

The brand is marketed toward those with a love of the outdoors. So, it makes sense that the brand would focus on preserving our natural environment.

Speaking on his decision to give the company away to fight climate change, Patagonia’s founder said, “Despite its immensity, the Earth’s resources are not infinite, and it’s clear we’ve exceeded its limits.

“Instead of extracting value from nature and transforming it into wealth, we are using the wealth Patagonia creates to protect the source. Each year, the money we make after reinvesting in the business will be distributed as a dividend to help fight the crisis.”

In the past, the California-based clothing company has been known for its unique marketing campaigns. They often encourage customers to buy only what they need. One of the most notorious saw the brand put out an ad that stated, “Don’t buy this jacket”.

The brand has also consistently donated one per cent of its annual profits to grassroots climate activists. Read the full open letter here.