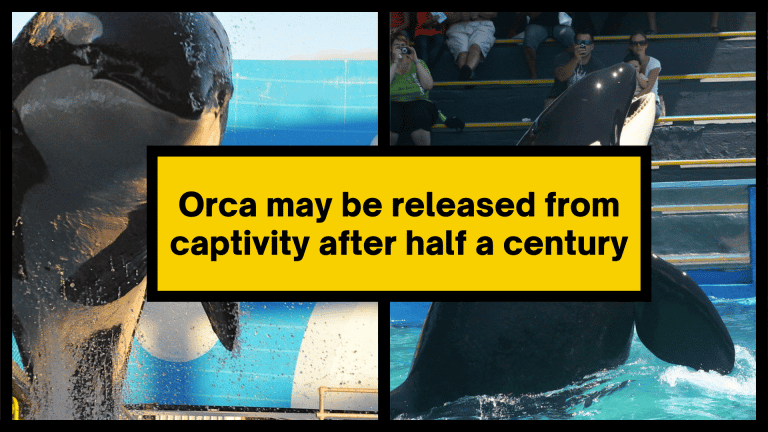 After spending half a century in captivity performing for crowds, Tokitae, the killer whale, may finally be released back into the ocean.

A famous performing Orca may finally be released from captivity after half a century.

The whale, known as Tokitae, was one of six Orca calves separated from their mothers back in 1970 to be sold to marine entertainment parks.

Now, after over 50 years in captivity, performing for crowds at one of the United States’ most popular marine parks, Tokitae may finally be set free.

A tragic start to life ‒ separated from her mother

On 8 August 1970, a group of men rounded up over 80 orcas in a cove in Whidbey Island off Washington State. According to Washington State Archives, six whales were captured, and five were killed in the process.

Known as the Penn Cove orca captures, this notorious event is regarded as one of the most horrific whale captures in recent history. According to accounts from the day, those living nearby were haunted by the orca’s human-like cries as they were separated from their families.

Tokitae, perhaps better known by her stage name Lolita, was one of the orcas captured that day. However, 50 years on, this famous orca could be released from captivity.

You will undoubtedly have heard of the famous Shamu Show at SeaWorld. Shamu was the name given to several captive orcas who performed for crowds in the show since the late 1960s.

Drawing in huge crowds, eager to see these so-called ‘killer whales’ up close and personal, the orca performances proved to be a highly profitable enterprise for these marine parks.

In recent years, people have learned more about the cruel treatment of these animals and the detrimental effects of holding them in small enclosures. In reaction, marine parks have faced controversy for their famous orca performances.

The story of Tokitae is similar to the tales of Shamu. Tokitae is the only survivor from the Penn Cove capture back in 1970. Until recently, she was held at the Miami Seaquarium in Florida, the smallest orca enclosure in North America.

Tokitae retired from performing earlier this year. So, activists are now ramping up calls for the orca to be released back into the ocean. Therefore, Tokitae can reunite with her mother, believed to be in her 90s, who still swims in the Salish Sea.

Supporters and animal rights activists from around the globe are supporting calls for the orca’s release. Charles Vinick works for the Whale Sanctuary Project, which works to free captive orcas around the world.

Speaking to The Guardian about the prospect of Tokitae’s release, he said, “We owe all these captive animals an opportunity to live in an environment as close to their natural environment as we can possibly provide.”

News that the famous orca may be released from captivity after half a century will be welcome to many. If campaigns prove successful, they may pave the way for the end of this cruel form of marine entertainment.

By living in any of these countries with the best quality of life, you will,…