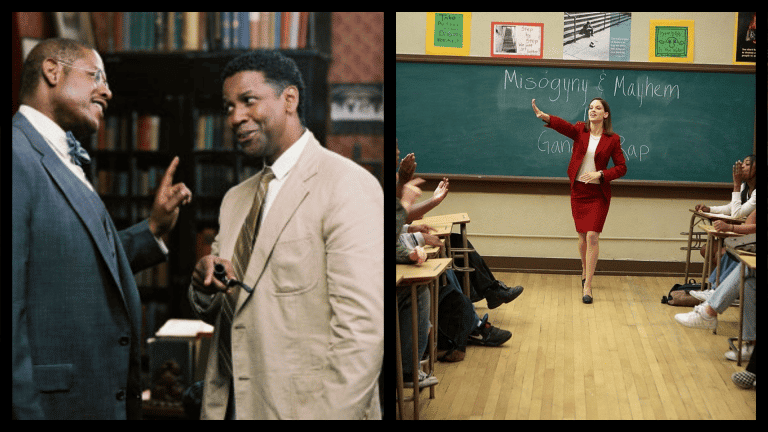 Are you struggling with motivation? Or maybe you just need some time off from the endless revision? Whatever the reason, here are ten movies to inspire students.

From uplifting true stories to light-hearted motivational films, the powerful messages of these movies to inspire students are sure to help you make your way through that pile of study material.

Studying can be hard, and many of us find it extremely difficult to stay motivated. So, whether you’re studying for your PhD or are finishing up your school exams, these inspirational movies for students are sure to help you refocus.

Now, give yourself permission to set down the pen and paper for a couple of hours and check out one of our top movies to inspire students.

10. The Paper Chase (1973) – the difficult transition to university life

Kicking off our list of movies to inspire students is the 1973 American drama movie, The Paper Chase.

Telling the tale of James T. Hart, a first-year student at Harvard Law School, we see how he uncovers his hidden strengths as he faces the challenges of starting university, adjusting to this new way of life, and dealing with tough professors.

Starring Julie Walters and Michael Caine, this fantastic film tells the story of a working-class girl who is given the chance to study at an illustrious university.

Working under the tutelage of an alcoholic professor, this classic story shows us how these two characters from vastly different backgrounds come together to help one another.

Starring Morgan Freeman, Lean on Me is an American drama film that tells the true life story of teacher Joe Clark who transforms a failing school.

Ridding the school of its gang and drug habit, this beautiful story sees Clark help the students discover their natural talents and excel where they were failing before.

Perhaps one of the most beloved movies of all time, Forrest Gump stars Tom Hanks as an innocent man who finds himself caught up in some of the most historical events in recent American history.

Despite the perceptions of others and the adversity he faces, this fantastic story sees Forrest prevail as he remains true to his heart throughout. We even see him inspire the famous dance of Elvis Presley. Sure, life was like a box of chocolates, right?

6. Freedom Writers (2007) – uniting intense rivals through the power of education

Starring movie stars Hilary Swank and Patrick Dempsey, Freedom Writers is one of the most inspirational films for students to watch to get in the study spirit.

The movie tells the story of unorthodox teacher Erin Gruwell, who unites her students, divided by race, to learn tolerance and encourages them to pursue education beyond high school.

5. Legally Blonde (2001) – seeing past the stereotype with this iconic character

Legally Blonde is a heartwarming American comedy film starring Reese Witherspoon. Undoubtedly one of our favourite movies to inspire students, this motivational movie will have you laughing and crying in one.

Directed by Robert Luketic, the movie tells the story of Elle Woods, who decides to prove everyone’s perceptions of her wrong by getting into Harvard Law School.

The movie tells Ramanujan’s inspirational story of growing up poor in Madras, India, before earning admittance to Cambridge University, where he grew to become one of the most renowned mathematicians in the world.

Starring Matt Damon, Robin Williams, and Stellan Skarsgard, Good Will Hunting is undoubtedly one of the most motivational movies for students to watch.

Directed by the talented Gus Van Sant, Good Will Hunting is an inspiring coming-of-age story about a down-and-out teen, Will Hunting, who turns out to be a brilliant student.

The Great Debaters is a dramatic retelling of the story of professor Melvin B. Tolson, who inspired his students to create the first black debate team.

Starring Denzel Washington, the movie is based on an article written about the Wiley College debate team in which they defeated the long-reigning champions from a college believed to be Harvard University.

This inspiring movie for students needs to be on your watchlist.

1. The Theory of Everything (2014) – one of the best movies to inspire students

Starring Eddie Redmayne and Felicity Jones, The Theory of Everything tells the inspiring story of renowned theoretical physicist Stephen Hawking.

Directed by James Marsh, the biographical film offers us an insight into Hawking’s time at Cambridge University when he was first diagnosed with amyotrophic lateral sclerosis.

The Blind Side (2009): Starring Sandra Bullock and Quinton Aaron, The Blind Side is a biographical sports drama film that tells the story of Michael Oher.

Through the love and support of his adoptive family, we see Oher reach his potential to become a successful football player.

This uplifting and classic American movie reminds us that everyone has their own lives outside of the school gates.

FAQs about movies to inspire students

What movie should I watch for inspiration?

Any of the movies listed above will help motivate you!

What is Good Will Hunting rated?