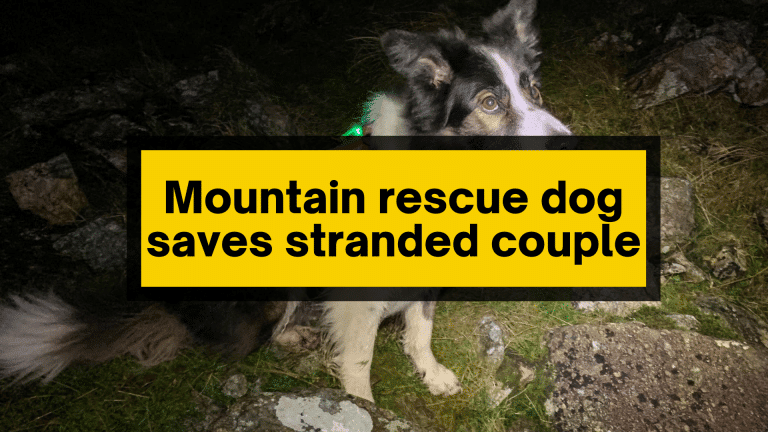 On New Year’s Day, the Keswick Mountain Rescue Team was called out at approximately 5.30 pm to rescue a stranded couple. The pair found themselves in trouble during their hike on England’s tallest peak, Scafell Pike.

Sharing the story with their social media followers, a spokesperson for the mountain rescue team revealed that as they were making rescue plans at the peak, their search dog Isla suddenly “bolted off away and down a steep gully away from the main paths”.

The spokesperson continued, “We gave chase only to find Isla barking as she had successfully located the couple, an excellent and impressive find.

“It is doubtful if we alone without Isla would have found the couple as they were hidden in a steep-sided gully away from the paths”.

After Isla bolted off from the mountain rescue team, they followed quickly in pursuit, only to find that she had stopped running and was now barking loudly to indicate that she had found the stranded couple they were searching for.

Isla had successfully discovered the stranded couple on steep ground in a gully. In total, the operation lasted approximately four hours.

The couple in question had successfully made it to the top of Scafell Peak before they became confused upon their descent.

While they initially managed to correct their course, they then found themselves lost a second time near Sty Head Pass. At this point, one of the two people “suffered a panic attack” while they found themselves trapped on steep ground.

It was at this point that the couple made the wise decision to dial 999 for Mountain Rescue.

Isla’s successful rescue is not the first occurrence of a man’s best friend playing an important role in rescuing people.

In 2021 Keswick Mountain Rescue Team reported an extraordinary double rescue effort by two dogs. This occurred after a man collapsed while walking in 2021.

Luckily for the man in that dangerous situation, his labrador and golden retriever bolted into action to save him.

Eyewitnesses at the time said that the black labrador “incredibly” rushed towards a passer-by and began to bark and gesture them to follow.

Meanwhile, at the same time, the golden retriever remained beside the unconscious man. The passer-by dialled 999 for help, and luckily the man was ok.