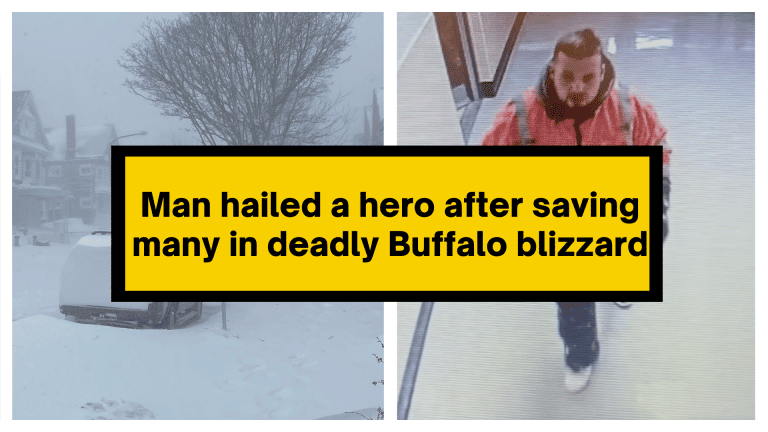 A man who was stuck in his car during the deadly Buffalo blizzard just before Christmas has been deemed a hero as he helped over 20 people get to safety, including saving numerous lives.

Mechanic Jay Withey is the man responsible for saving numerous lives during the terrifying Buffalo blizzard that occurred on 23 December.

Withey was stranded on the side of the road in his truck with an elderly woman who he had pulled off the street.

A night of uncertainty and fear, he managed to turn it around by helping many people around him to avoid the freezing temperatures the cold night held.

Mr Withey said in a local radio interview, “It was the only time in my life I actually thought I was going to die”.

He continued, “Snow piled up against my truck. You hear people freezing to death in their cars; it was a very scary moment”.

In an act of desperation, he went door to door, offering people $500 for refuge on their floors for the night. Each house he approached denied him access.

Later, an elderly woman fearing for her life knocked on his car window and asked to join him. The pair rotated shifts turning the car on and off throughout the night until the fuel ran out. When Withey called the police, they said they couldn’t help.

After spending the night in his truck with the stranger he welcomed in, he made the decision to break into a nearby school.

Here, he noticed multiple cars in the school car park, where he ushered ten people, ranging from ages mid-twenties to 70 years old,  inside to shelter from the blizzard. The group remained in the school until the evening of Christmas Day.

A testament to who he is, he even left an apology note ‘To whom it may concern’ for breaking the window to gain entry. In the note, he wrote, “ I had to do it to save everyone and get them shelter and food and a bathroom, Merry Christmas”.

Not all heroes wear capes – applauded around the world

On a night described as Buffalo’s “blizzard of the century”, 39 lives were claimed due to the horrifying conditions as well as poor planning and infrastructure. The response to the blizzard is currently under further investigation.

This is why people across the world are dubbing Jay Withey a hero. He took matters into his own hands and potentially saved over a dozen lives thanks to his initiative and determination.

He spoke of how the people who turned him away at their doors were somewhat of a blessing in disguise because otherwise, he wouldn’t have been able to assist anybody at the school.

The Cheektowaga Police Department applauded his efforts on Facebook, saying, “The selflessness that people showed to help others during the storm is what WNY (Western New York) is really made of.

“This group of amazing people took care of each other and the building they found shelter in”.