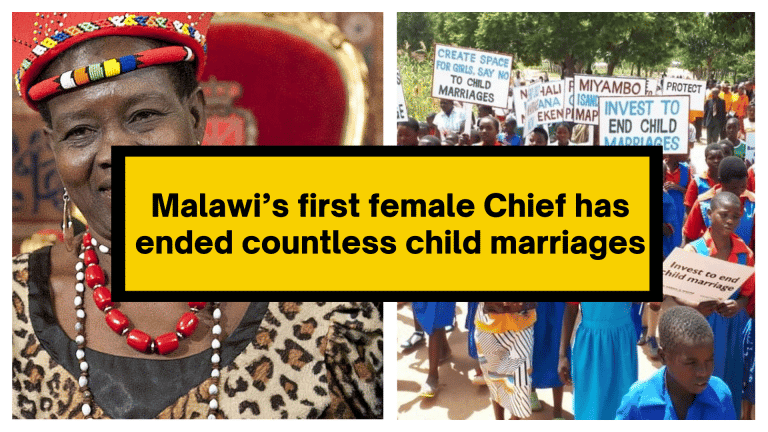 The first female Chief of Malawi, Chief Theresa Kachindamoto, has annulled almost 4,000 child marriages in the central region of Malawi since being appointed in 2003.

Chief Theresa Kachindamoto was appointed Chief of the Dedza District back in 2003, a position usually reserved for men.

Since claiming her position, Theresa Kachindamoto has been instrumental in bringing almost 4,000 child marriages to a halt.

Theresa Kachindamoto – a beacon of hope

Theresa Kachindamoto has informal authority over more than 900,000 people in the Dedza District in the central region of Malawi.

She is known as a key figure in enacting forceful action in dissolving child marriages in the region as well as insisting on education for girls as well as boys.

Malawi is one of the world’s poorest countries, and a UN survey in 2012 found that more than half of the girls in the country were married before the age of 18.

Young girls in Malawi are subjected to horrific “cleansing” rituals to prepare for marriage, and as long as their parents consent, girls under the age of 18 are allowed to marry, despite contradictory laws.

By 2019, Theresa Kachindamoto had convinced community leaders to change the civil code and ban early marriage. At this stage, she successfully annulled more than 3,500 early marriages, bringing her to international recognition.

Child marriage in Malawi – an unfortunate and relentless practice

In 2015, Malawi passed a law forbidding marriage before the age of 18. However, traditional authorities still say that children can get married with the consent of their parents.

Theresa Kachindamoto was able to persuade 50 sub-chiefs in her district to agree to abolish early marriage and annul existing unions. She also fired four sub-chiefs responsible for child marriage continuing in certain areas.

She told Nyasa Times, “I don’t want youthful marriages, they must go to school… No child should be found loitering at home; gardening or doing any house hold chores during school time”.

UN Women and UNICEF plan to work with traditional leaders in other countries to copy the best practices of Chief Kachindamoto in reducing child marriages.

Culturally, the title of Chief in the Ngoni tribe is reserved for men, and Theresa Kachindamoto said she never thought to aspire to such a position.

Theresa Kachindamoto comes from a long line of royals, and when her father died, clansmen selected her to take her father’s seat as the leader of the people of Dedza.

After much hesitation, she agreed to take on the position being appointed to her. As soon as she was enacted, she said, I wanted to discuss guidelines for abolishing child marriage. I remained firm in my intentions, and the leaders agreed to enact bylaws, committing to the effort”.

Targeting parents, religious leaders, and traditional leaders at the forefront of organising illegal marriages in defiance of the law, Theresa cracked down on the importance of education over anything else.