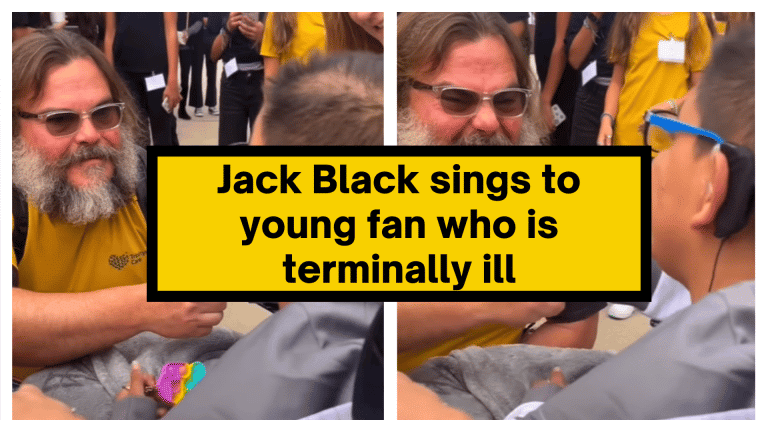 The much-loved actor is known for his role in films such as The Holiday, Gulliver’s Travels, and, of course, School of Rock.

A clip of Hollywood actor Jack Black went viral early last week, in which the star is seen serenading a young School of Rock fan.

Released in 2003 (we know; how was that 20 years ago?!), School of Rock has become somewhat of a classic among both original and new audiences.

Brightening the day of a young fan, Black is seen singing the movie’s iconic song, ‘The Legend of the Rent’, before the teen decides to join in for himself.

The 15-year-old in the video is called Abraham, and he is currently battling a terminal illness called Pearson Syndrome. Pearson Syndrome is a rare and severe rare mitochondrial disease that causes problems with the development of blood-forming cells in the bone marrow.

According to Upworthy, Abraham has been in palliative care with TrinityKids Care in California for the past year, a hospice program that offers compassionate end-of-life care to children and teens in the LA and Orange County area of Southern California.

Jack Black hosts the fundraising initiative Layla Paige and Friends Walk for TrinityKids Care. It was at this event on 17 October that Jack Black was seen serenading the young School of Rock fan.

In the clip, which has since gone viral, a nurse introduces Black to Abraham. Abraham then tells the actor that School of Rock is his favourite movie.

Thanking the teen for his kind words, the actor kneels down and takes Abraham’s hand before serenading him with the movie’s iconic song. As his character Dewey Finn said, Black continues to “service society by rocking”. He really is out there “liberating people with music”.

The heartwarming video has since racked up thousands of likes, with many praising the actor’s kind act. In the comments of the video posted on Upworthy’s Instagram account, one person wrote, “Jack Black has a kindness to him that you can hear in his voice.

“It’s always easy to forget that it doesn’t take much to do a kind deed, and being kind to others makes you happier, so it’s a win-win.”

An incredible cause ‒ caring for young people with terminal illnesses

There is nothing more heartbreaking than finding out a child or young person has a terminal illness. So, TrinityKids Care works to make sure that these young people get the chance to live the fullest life possible, offering support to both them and their families.

Providing “comforting and empowering support” to young people and their families, TrinityKids Care offers everything from grief counselling and bereavement services to medical and care support.

An incredible cause, you can find out more about the amazing work of this organisation here.