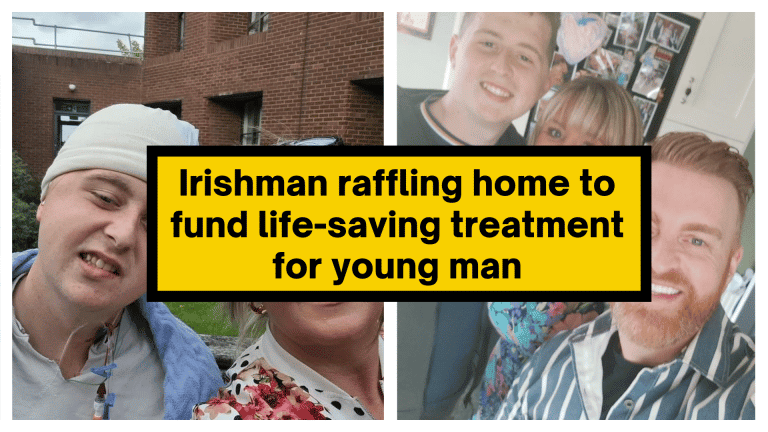 County Louth man Gordon Kenny has put his apartment in Dundalk up for raffle to help raise funds for the ongoing treatment of 18-year-old Stephen Kirk, who has stage 4 Glioma.

Glioma is a type of tumour that occurs in the brain and spinal cord, and the specialised treatment he needs is only available in Texas and will cost the family €300,000 to access.

In a bid to help raise funds to get over to the other side of the world and get the treatment he needs, family friend Gordon Kenny put his house up for raffle, selling tickets at €12, all revenue of which will go towards Stephen’s recovery fund.

Stephen’s monthly medical bills will cost at least €23,000 a month for the foreseeable future, plus flights and accommodation to Texas and Turkey to source medication.

His family is desperately seeking to raise as much money as they possibly can to give Stephen the best chance of beating this awful disease.

Stephen’s mother, Jean Woods, told IrishCentral that Stephen would be “lost” without the incredible support of the community so far.

She said, “We’d be lost without them. It wouldn’t be possible without everyone’s support. Even the wee shops around the town all have buckets out for him. They’re just brilliant”.

Stephen found out he had cancer last year in December on his 18th birthday after suffering seizures, chronic headaches, and back pain.

He underwent a 19-hour surgery that removed 95% of the tumour, but sadly doctors told Jean that her son still had terminal cancer that could kill him within months. Due to radiation, he was confined to a wheelchair following the surgery.

The family was told the cancer was incurable, but Jean would not give up on her son. She began researching potential treatments further afield in Europe and the US.

After finding a cancer specialist in Texas, she was to book an appointment for Stephen with the help of a GoFundMe.

Since starting the treatment earlier this year, there have been visible benefits. He is able to walk again, he has gained weight, and has even been able to go cycling.

Jean said, “I just can’t lose my youngest son. I can’t live without my kids. People always say to me that I’m so strong. But I’m only strong because I still have him. I just have to save his life”.

Jean’s best friend, Gordon Kenny, is raffling his home in Dundalk in an attempt to raise the funds for the life-saving treatment.

He made the decision to do this when money from the GoFundMe began to stall. He said, “We were trying to think of ways to accumulate a large sum to help fund Stephen’s treatment and put them in a comfortable position where there were no fears of medication supply”.

However, the property will only be awarded to the winner if 55,000 tickets are sold before the draw takes place on 20 December this year.

In the case that the target isn’t reached, a cash prize equalling 50% of the total revenue will be given to the winner. To help Stephen on his road to recovery, you can buy a ticket for the raffle here.

10 inventions that could stop climate change