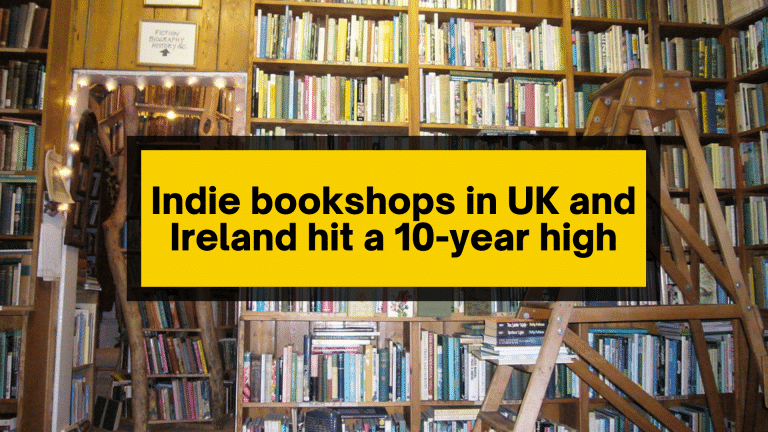 Despite an overall rough year for the retail industry, many indie bookshops managed to defy the odds as the number of independent bookshops in the UK and Ireland climbed to a 10-year high in 2022.

While the pandemic and subsequent lockdowns caused many businesses to suffer, independent bookshops managed to defy the odds and thrive during the turbulent period.

Recent recent statistics have revealed that the number of independent bookshops in the UK and Ireland hit a 10-year high in 2022.

A recent report which the centre for Retail Research conducted described 2022 as a “brutal” year for Britain’s retail sector.

With more shops shutting down than at any other point in the past five years, an average of about 47 shops on average closed every day.

The British Retail Consortium summed up 2022 as “an exceptionally difficult year for both consumers and retailers”, which resulted in a considerable fall in the volume of sales.

Meryl Halls, the Booksellers Association‘s (BA) managing director, said the significant independent bookstore revival confirmed the importance of independent bookstores. Despite the positive trend of more and more indie bookshops opening, Halls also admitted that there are still many challenges which they have to face.

“With the economic headwinds coming our way, recession, inflation, labour shortages and massive cost increases across the board, bookshops need support.

“Margins are extremely tight, and for bookshops to thrive on high streets, they need governments to take action to protect small businesses from the cost-of-living crisis, as well as unequal tax burdens such as business rates,” explained Halls.

Halls also revealed that during the pandemic, there had been a “frankly astonishing number of new entrants to bookselling”, but similar to other high street businesses, these stores were still quite vulnerable as the economy looks to be heading into a recession.

Between the years of 1995 to 2016, the number of overall independent bookshop members in the BA dropped from 1,894 to 867 as the industry faced a lot of competition from global giants such as Amazon and an immense amount of financial pressure from hikes in business rates.

Speaking on the importance that bookshops hold, Meryl Hall said that “Bookshops bring social and cultural capital to every town, village, suburb or city centre they are part of, and punch way about their weight in terms of impact and engagement locally, and nationally.

“We want the number of bookshops to keep rising”.