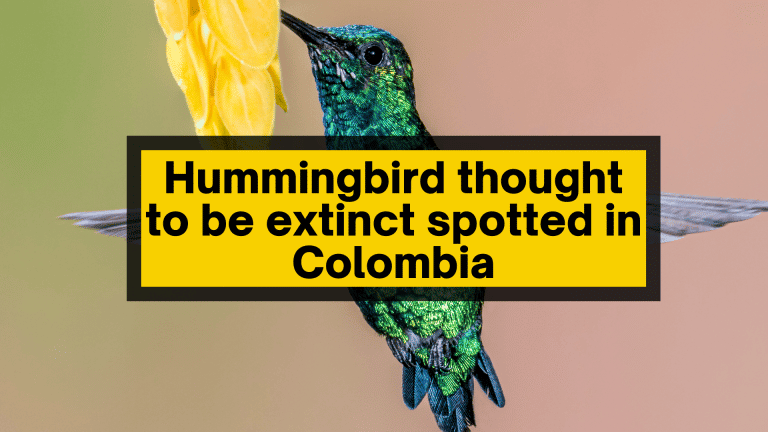 An Emerald-green Hummingbird, thought to be extinct, was miraculously spotted alive and well in Colombia recently.

Recently in the Santa Marta mountains of Colombia, a fantastic sight was beheld, that is, the sight of the Santa Marta sabrewing hummingbird, a species of bird that was thought to be extinct.

Experienced birdwatcher Yurgen Vega managed to spot and identify the bird as the rare Santa Marta sabrewing hummingbird and successfully got a photograph of it, which was the first confirmed photograph of one in ten years.

Only the second sighting in decades − a rare sight to behold

Yurgen Vega’s sighting of the Santa Marta sabrewing hummingbird was a rare occurrence as it remains only the second time one of these majestic creatures has been spotted in decades, confirming that the animal is not extinct.

He was able to use his vast wealth of knowledge to accurately identify the bird thanks to noticing its green feathers, black curved bill and blue throat.

Vega recalled the experience as one of sheer surprise as he said, “When I first saw the hummingbird, I immediately thought of the Santa Marta sabrewing. I couldn’t believe it was waiting there for me to take out my camera and start shooting.

“I was almost convinced it was the species, but because I felt so overcome by emotion, I preferred to be cautious.

“It could’ve been the Lazuline sabrewing [Campylopterus falcatus], which is often confused with Santa Marta sabrewing. But once we saw the pictures, we knew it was true.”

So rare is the Santa Marta sabrewing that it was noted as one of the top ten most-wanted lost birds last year. As the bird is so elusive, there isn’t a significant deal known about it.

It generally lives in humid and tropical forests and is thought to be migratory, as many birds are. The population of Santa Marta sabrewings in the Sierra Nevada de Santa Marta, researchers believe, is now relatively small and dwindling.

“When we announced the top 10 most-wanted lost birds last year, we hoped that it would inspire birders to look for these species and as this rediscovery shows, sometimes lost species re-emerge when we least expect it.

“Hopefully, rediscoveries like this will inspire conservation action,” enthused Mittermeier. Hopefully, this won’t be the last sighting of the Emerald-green hummingbird, and the species will experience a rejuvenation of sorts in the coming years.