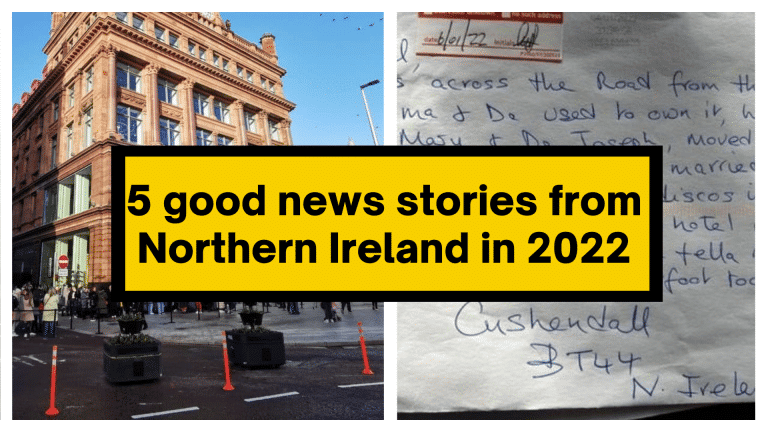 With negative news stories often dominating the main headlines, we thought we’d take a look back at some of the most positive news to come from Northern Ireland in 2022. Want to start the New Year on a high? Read on for some of the most uplifting stories from last year.

With the ongoing cost of living crisis, the war in Ukraine, and the impact of the coronavirus pandemic making headlines around the world, it can be difficult to see the positive amidst all the doom and gloom.

However, there are plenty of amazing things happening every day that are sure to provide some inspiration and bring a well-needed smile to your face as we head into 2023.

From inspiring people to charitable acts and more, we are revealing five amazing good news stories from Northern Ireland in 2022 that you need to know about.

5. Belfast’s Primark building restored to former glory – an important part of the city

Back in 2018, people in Belfast and the rest of Northern Ireland watched on in horror as the iconic Grade B1 listed Bank Buildings went up in flames.

This historic building, which most recently housed the high street store Primark, was a central piece of the city’s history and skyline. So, it was a huge shock to see it destroyed.

After four years of rebuilding work, during which the building was hidden by scaffolding, Bank Buildings finally reopened in October 2022, welcoming visitors from all across the country through the doors.

Undoubtedly one of the best good news stories from Northern Ireland in 2022, nothing beats the feeling of walking down that part of the city centre street after seeing it closed off for almost half a decade.

4. The unaddressed letter – a feel-good tale

Perhaps the most Northern Irish thing to ever happen, it really brought a smile to our faces when news spread of the letter that was delivered to the correct person, not by the address but by an in-depth description of the person and place it was intended to reach.

The envelope read, “Feargal, Lives across the road from the Spar, his ma and da used to own it, his mother was Mary and Da Joseph, moved to Waterfoot after he got married, plays guitar and used to run discos in the parochial hall and the hotel in the 80s. Friends with the fella runs the butchers in Waterfoot too.”

Cushendall-based musician Feargal Lynn later took to Twitter to thank his local Royal Mail workers for their skill and detective work in managing to get the letter to him.

When it comes to the state of the planet, it often feels like it’s all doom and gloom and that we – and the planet – have no chance of survival. So, when we hear positive stories about ways in which we’re helping to protect Mother Earth, we really do want to shout about them.

Awarded by the Continuing Professional Development Charity (CPD), Belfast was named among the leading cities for climate action.

The reason it received this accolade was due to a number of initiatives the city has been involved in recently, including the One Million Trees programme.

With plenty of progress when it comes to doing what is better for the planet, we have to say this is definitely one of our favourite good news stories from Northern Ireland in 2022.

While most of his peers are enjoying their time at university, 20-year-old Patrick from County Fermanagh was sadly paralysed while undergoing treatment for scoliosis.

Hoping to show her son just how loved he is, Wendy launched an appeal to get Patrick as many birthday cards as possible – and the response was incredible.

Hundreds of cards arrived at Patrick’s door in time for his 20th birthday in November. We’re sure it was a birthday to remember!

No one wants to get the news that they or their loved ones have an illness, such as cancer. It can be truly earth-shattering, causing much stress and panic.

Back in November, Liathán O’Donnchadha posted a beautiful video online in which she brought her nine-year-old daughter to tears by telling her that “mummy is cancer free”.

Undoubtedly one of the best good news stories from Northern Ireland in 2022, we challenge you to make it through the whole video without crying. We know we couldn’t!

For more, check our article on the best good news stories from Ireland in 2022.