5 GOOD NEWS stories from Ireland in 2022 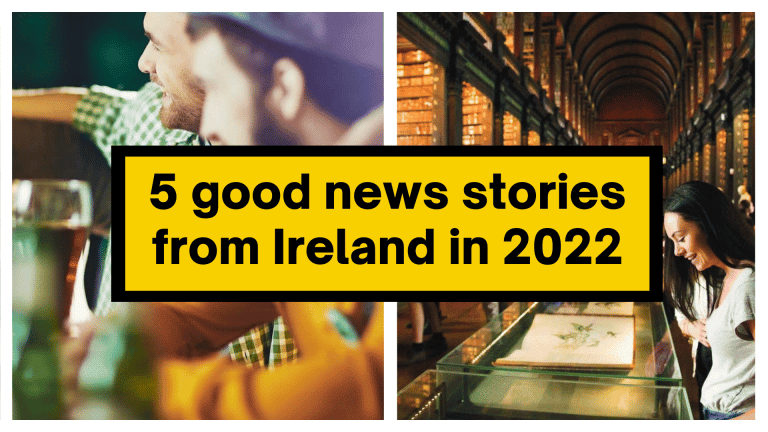 Do you remember any of these good news stories from Ireland in the last year?

As we are now at the start of 2023, we are reflecting on all the good news from last year. Ireland had an abundance of good news stories, and we found it only right to share some of that goodness with you.

Here are some of our favourites, which filled us with joy and optimism. We’re sure you will delight in some of these good news stories from Ireland.

5. Cork woman selected for the first civilian flight around the moon − the Cork woman is set to make history

Rhiannon Adam, a 37-year-old artist from County Cork, was selected to participate in the dearMoon project. The orbital trip aims to inspire artists to make something truly out of this world. Japanese billionaire Yusaku Maezawa is funding the project.

Rhiannon is quoted on the dearMoon website, saying, “Every day I pinch myself; it seems like an impossible dream coming true. I aim to create work that does justice to this transformative experience”.

Anyone who has visited the Emerald Isle will surely agree that the island’s locals are some of the friendliest in the world. On October 4th, Condé Nast Traveller announced Ireland as the friendliest European country in their Readers Choice Awards.

The magazine listed the Irish people as “some of the friendliest and most welcoming to visitors in the world”. However, it wasn’t just the people and their natural social skills that helped seal the deal. Many attractions were listed as a must when visiting the country.

From The Giants Causeway to the Cliffs of Moher to Dublin city’s busy atmosphere, Ireland is a place that should be on everyone’s bucket list.

3. Irish passport considered one of the most powerful in the world− ranked in the top 10 strongest passports

This is one of the best good news stories if you are a travel lover. If you have an Irish passport, good for you, as it was named one of the best passports. The Henley Passport Index listed Ireland as the sixth most powerful passport in the world in July 2022.

Other countries ahead of Ireland include Singapore, South Korea, Spain, Germany, Finland, Italy, Luxembourg, Austria, Denmark, Sweden and the Netherlands. So, if you hold any of these passports, then you are in luck.

2. ‘Climb for Charlie’ raises over €2 million − one of the top good news stories from Ireland; incredible numbers raised for motor neuron disease and suicide charities

When the greatly esteemed news broadcaster and journalist Charlie Bird announced he had motor neuron disease in October 2021, many people despaired.

This did not stop the established broadcaster, who knew he had to do all he could to help raise awareness for the disease while he still could. Thus, ‘Climb for Charlie’ was born. In April 2022, Charlie climbed Croagh Patrick in County Mayo alongside 1000s of supporters.

A book was also released in June, honouring the tremendous feat of Charlie Bird and his amazing supporters.

It’s not called the ‘Land of Saints of Scholars’ for no reason. In a survey carried out by ‘The Campus Advisor’, Ireland has been listed as one of the top places for higher education, as decided by a survey.

The survey put the question to 17,824 students, asking them to consider multiple factors, such as cost of living, quality of education, career prospects, and culture. Ireland made it to an impressive number 5 in the rankings.

This is undoubtedly one of the best good news stories from Ireland if you are a prospective student.