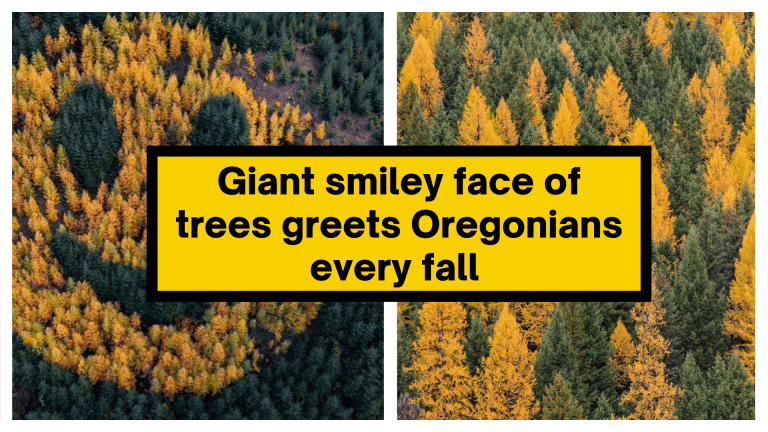 A massive circle of trees on Hampton Lumber land forms a huge smiley face every fall. This is thanks to a design created in 2011.

South of Oregon, between Willamina and Grand Ronde, a giant smiley face of trees greets drivers every fall.

In 2011, Hampton Lumber decided to create the design by planting a mix of Douglas fir and Larch trees during the reforestation of the area.

The giant smiley face should return each Autumn season for the next 30 to 50 years. At this point, the trees are ready to be harvested.

Anyone driving along Oregon 18 at this time of year will be greeted with a delightful smiley face amongst the forested hillside of Polk County.

It is visible near mile-marker 25 on Oregon 18, between the towns of Grand Ronde and Willamina.

A spokesperson for the company, Kristin Rasmussen, said that the smiley face was designed and planted by the Hampton Lumber co-owner, David Hampton, and the company’s now retired forester, Dennis Creel.

“After every harvest, our foresters start planning the reforestation process,” she said. “They typically plant a variety of native species depending on the elevation and soil conditions, including Douglas fir, western hemlock, noble fir and western red cedar”.

The trees – a natural smiley face

The giant smiley face is made up of a mix of Douglas fir and Larch trees. Larch trees are conifers with needles that will turn yellow and drop off in the autumn. So, they make up most of the face.

The smile and eyes are then made up of evergreen Douglas fir conifers. To make the smiley face back in 2011, planting crews used a rope to plot the circle and triangulate the location for the eyes and mouth.

Anyone passing by the area will be able to see the huge face for the next 30 to 50 years. At this point, the trees will be ready to be processed in lumber at Hampton’s sawmills in Willamina and Tillamook.

Apparently, once this smiley face is retired for lumber, the company will try to make a different symbol amongst the trees.

A beautiful symbol for Oregon – it has become iconic

Oregon is a beautiful state for the fall season, and the natural smiley face in the forest makes it that much better for an autumn road trip.

The smiley face has become somewhat of an icon in the area. It has been said to brighten people’s days as they drive along the highway.

Co-owner David Hampton told Fox Weather, “Believe it or not, the smiley face has gone worldwide. It’s an absolutely amazing phenomenon. We have customers in Japan who sent us pictures of a newsreel that they shot”.

He continues, “We just thought that we ought to show folks that, you know, an open space like this where we harvest can be a happy place”.