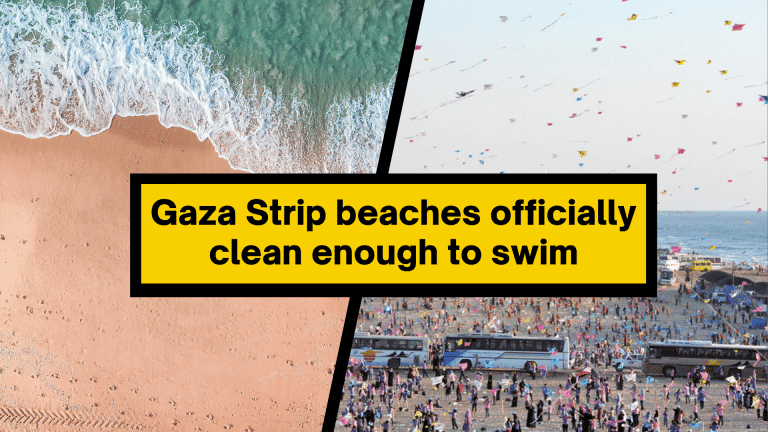 Beaches in the Gaza Strip previously came with a health warning, as people were advised to avoid the area. However, beachgoers can now visit the sandy shores without concern.

The Gaza Strip clean-up has allowed locals to visit the beaches for the first time in years, as they enjoy clean and sewage-free waters.

Thanks to an internationally-funded clean-up operation and years of cross-border lobbying by environmental campaigners, the beaches are now safe to visit.

A positive step for the impoverished area, beachgoers can now enjoy the safe, clean waters of the Mediterranean Sea.

Gazans have been flocking to the blue waters as a huge Gaza Strip clean-up allows locals to visit beaches for the first time in years.

A multi-million dollar project financed by the World Bank brought an upgrade to the area’s crumbling facilities. This means that most of the coastline along the Gaza Strip is now officially clean enough to swim in.

The project has been a long time coming, with efforts often stalled due to the joint Israeli-Egyptian blockade along the occupied Palestinian region.

Speaking to The Guardian, resident Nabila Haniya explained, “We didn’t come for seven years because the water was not safe. Now it looks so much better… The colour is different, more blue. This is our second beach day this year.”

Watching her children playing in the Meditteranean waters, she continued, “We have a lot of wars and troubles. The kids deserve to have some fun.”

Home to almost 2.3 million people, the Gaza Strip is one of the most troubled places in the world, with ongoing wars and poverty impacting those living in the area.

The issue of clean water is one that has been at the forefront of the minds of local residents. So, getting the chance to enjoy sewage-free waters is a huge relief to many.

Something many of us take for granted ‒ a life-changing facility

Throughout most of the world, many of us take access to clean water and sewage-free shorelines for granted. However, for those living in the Gaza Strip, having access to this is a huge change.

The Gaza Strip clean-up not only allows locals to visit beaches for first time in years. Rather, with 95% of the region’s waters previously being undrinkable, this initiative could also offer greater access to clean drinking water.

Speaking on the clean waters, Gidon Bromberg, the Israeli co-director of EcoPeace Middle East, said this is the first “good news to come out of Gaza in a decade”.