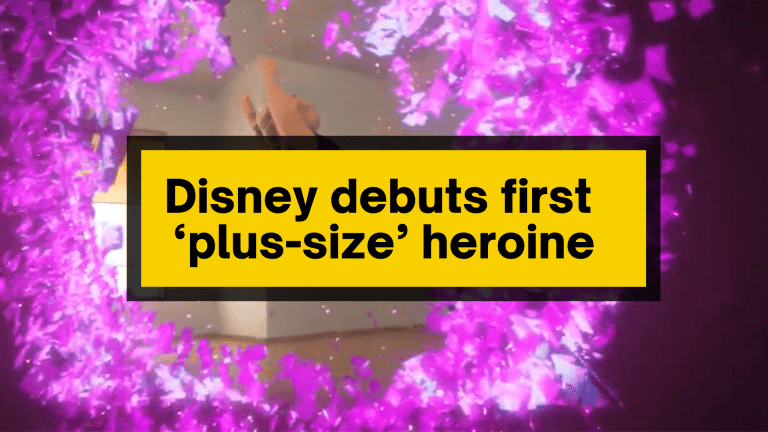 The new animation by Disney, Reflect, tells the story of Bianca, a young ‘plus-size’ ballet dancer who struggles with her body image.

Now streaming on Disney +, Disney finally has its very first ‘plus-size’ young heroine with the short animation Reflect, and fans have been elated.

Reflect is part of season two of Disney’s Short Circuit series, which is a series of experimental films. The story follows Bianca, a young ballet dancer who struggles with her confidence and body dysmorphia.

In a quiet move from Disney, this is a step in the right direction for teaching young people that all bodies come in different shapes in sizes.

Disney debuts first ‘plus-size’ heroine – a changing of the tide

The short animation is full of metaphors and symbolism. In one scene, Bianca’s ballet teacher inspects her pose at the barre and says, “Tight tummy! Long neck!”.

At this point, the mirror in front of her shatters around the young ballerina, reflecting her body image struggles.

The animation dropped on the studio’s streaming platform in September. From start to finish, it shows her channelling her inner confidence to accept who she is and develop strength.

Reflect is directed by Hillary Bradfield. She is a Disney Animation artist who has worked on several movies, like Frozen 2 and Encanto. She introduced the first Disney princess with glasses.

A cultural turning point – a step in the right direction

For a conglomerate like Walt Disney Studios to produce something like this, it’s a pretty big deal. Thus, moving multi-media in a more positive direction in terms of body image.

TikTok was a huge bolster for the trailer that circulated before the short animation’s release, and people were evidently elated with this cultural turning point.

One TikTok user said, “This plus size Disney ballet dancer will mean so much to so many people”.

“I saw this Disney short called Reflect and it emotionally tore me up,” confessed another. “It’s about a little plus size girl doing ballet and the mirrors start to swallow her up because of her body insecurity but she destroys them by dancing anyway”.

In the face of adversity – not everyone will always agree

Like any move on the internet or in the media, everyone doesn’t have to agree. Walt Disney received certain criticisms that the company had become “too woke”.

Walt Disney Co Chief Executive, Bob Chapek, was asked to address the criticism. He said that its programming will cater to the audience and reflect the “rich, diverse” world of viewers.

He said, “The world is a rich, diverse place, and we want our content to reflect that”. What is most certainly an incredible changing of the tide, you can head over to Disney + to watch Reflect and others from the Short Circuit series now.

10 motivational speeches about life you need to watch