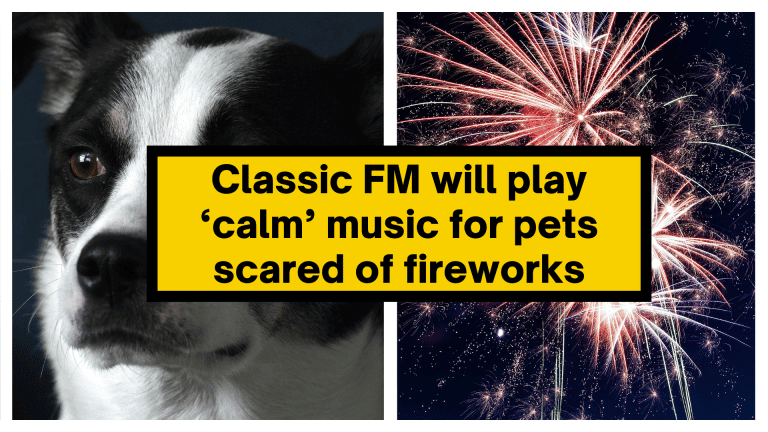 Pet Classics is a specially scheduled radio show for Bonfire Night, during which the popular UK station will play music to relax distressed pets during fireworks displays.

Fireworks season is well and truly upon us, and there’s nothing more exciting than watching the colourful displays light up the night sky.

However, fireworks aren’t such a joyous occasion for our four-legged friends, who can often find all the noise and flashing lights incredibly distressing.

In an attempt to relax any animals who might be stressed out, Classic FM has announced the station will play ‘calm’ music for pets who are scared of fireworks.

Many animals have much more powerful hearing than humans. For example, dogs and cats are able to hear sound between four and five times farther away than us.

So, imagine you’re just relaxing at home, then all of a sudden, you hear an almighty bang, then a loud crack, followed by more and more loud noises that you weren’t expecting and can’t explain. It would be pretty scary, wouldn’t it?

Well, that’s pretty much how our pets feel during fireworks displays. We’re fine because we know exactly what’s going on, and we know we’re not in danger. But for pets, it’s quite a frightening experience.

In an attempt to calm stressed-out cats and dogs this fireworks season, Classic FM has teamed up with the RSPCA to bring two Pet Classics programmes with specially curated playlists.

The shows will be broadcast on Friday, 4, and Saturday, 5 November, from 5 pm to 9 pm. Thus, making sure pets avoid distress during the UK’s Bonfire Night. Both shows will be packed with soothing classical music to help calm any anxious pets.

Pet Classics will be hosted by presenter Charlotte Hawkins. During the evening, she will feature dedications to listening pets and advice from the RSPCA for owners looking to reassure their four-legged friends.

Alongside the dedicated shows, Classic FM has also created a playlist of peaceful classical music to soothe pets. You can listen to this at any time on Global Player.

They have also compiled a handy list, ‘10 calming pieces of classical music for your pet’. The list features everything from Elgar’s ‘Mina’ to Debussy’s ‘Rêverie’ and you can check it out here.

Recently, the RSPCA conducted a survey into the impact of fireworks displays on animals.

They discovered that two-thirds of animal owners reported their pets as being distressed during the displays. The survey also revealed that playing relaxing music was the most common method to help calm and prepare the animals. This was closely followed by owners taking their pets elsewhere during fireworks displays.

Classic FM first broadcast Pet Classics back in 2017. Since then, it has proven hugely popular with pets and owners up and down the country. Last year #PetClassics even trended at number one on Twitter, with many sharing photos and videos of their chilled-out pets.

Thus, Classic FM’s announcement that they will play ‘calm’ music for pets scared of fireworks is sure to be welcome news to pet owners everywhere.