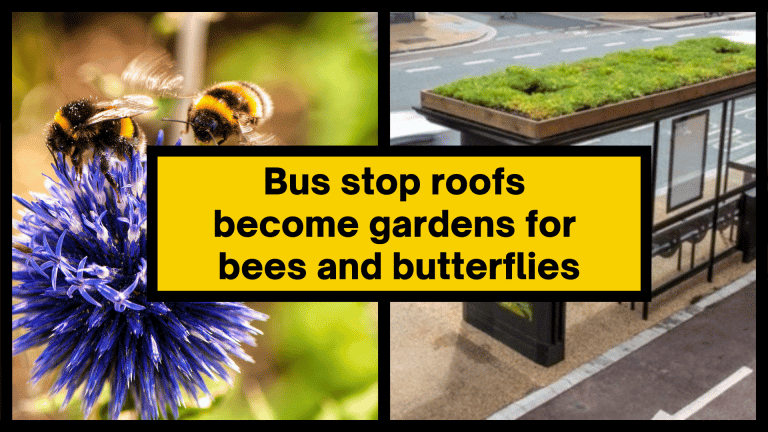 Countries across the world are planning to follow the trend of converting bus stop roofs into ‘buzz stops’, where bees and butterflies can thrive.

Bus shelter roofs around the world are to be turned into gardens for bees and butterflies.

The concept of the bee bus stops was first introduced in Utrecht in the Netherlands and has since spread across Europe and North America.

Now, local councils across the UK are putting plans in place to introduce the bee gardens to bus stops all across the country.

Where nature and urban collide ‒ living in harmony

The idea to turn bus shelter roofs into gardens for bees and butterflies is the perfect way to allow nature to thrive in busy, urban environments.

The idea has taken the world by storm since it was first introduced in Utrecht in 2019. Now, outdoor advertising company Clear Channel is working to introduce the initiative across the UK.

With plans in place for cities across England, Scotland, Wales, and Northern Ireland, the number of bee bus stops is set to increase by at least 50% before the end of this year.

What is a bee bus stop? ‒ a place for nature to thrive

With plans underway for bus shelter roofs to be turned into gardens for bees and butterflies, you may be wondering what exactly these bee bus stops are. Previous shelters have provided a small natural environment, alive with pollinator-friendly flora, such as wild strawberries, poppies, and pansies.

So, not only will the bee bus stops provide somewhere for bees and butterflies to collect pollen. Rather, they will also bring some colour and life to what were before pretty plain and boring bus stops.

Leicester is currently leading the UK cities regarding the introduction of bee bus stops. The East Midlands city has gained an incredible 30 bee bus stops since 2021.

Derby currently has 18, while cities such as Southhampton, Newcastle, Sunderland, Oxford, Cardiff, and Glasgow have also been introducing them. Last year, Brighton council installed a bee bus stop after 50,000 people signed a petition calling for one in the south coast city.

Due to the weight of the soil, bus stops must be specially designed to accommodate the bee and butterfly garden. So, it is not as simple as turning already installed bus shelter roofs into gardens for bees and butterflies.

Because of this, Clear Channel is focusing on replacing old run-down bus stops with the new style. Rather than ripping out and replacing perfectly good and relatively recent additions.

Clear Channel is currently working alongside the Wildlife Trust to ensure they’re providing the optimum environment for nature to thrive as part of the ongoing project.

Read more about the bee bus stops across the UK here.