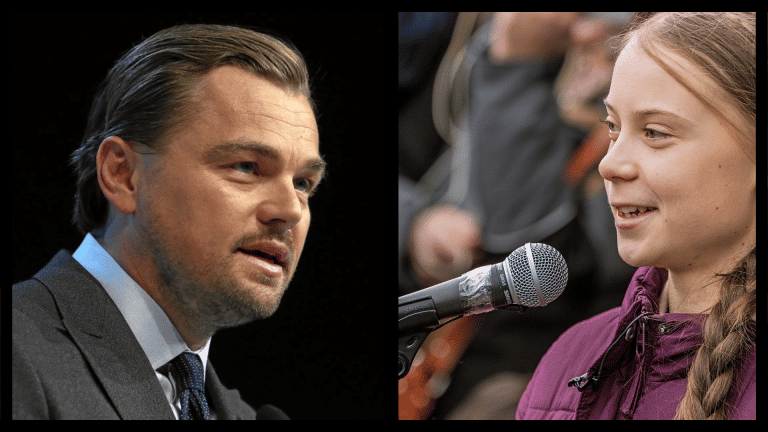 It’s fair to say that many inspiring celebrity activists currently leading the climate change fight are all successfully using their status to spread awareness about the dangers of climate change.

Celebrities are in a unique position compared to the average person. Thanks to their profession and status, they have a massive platform from which they can interact with and inspire people.

This article will list who we believe to be the top ten inspiring celebrity activists leading the climate change fight.

10. Rihanna – her foundation has pledged $15 million to organisations fighting for climate justice

Besides this, her famous beauty line Fenty is cruelty-free and has embraced sustainability in several ways, such as designing products without the need for cotton rounds and offering refills for products.

9. Joaquin Phoenix – one of the most active promoters of veganism

While Joaquin Phoenix is widely admired for his many Oscar-winning performances, he also deserves acclaim for his environmentalist and animal rights activist work.

Phoenix supports the PETA organisation and is an active promoter of veganism. He has produced many documentaries which tackle the subject of meat consumption and the link to its impact on the environment.

As a former member of the British royal family, Prince Harry naturally has a substantial public profile. He has used this to his advantage on many occasions to help to increase and spread awareness of critical environmental issues.

He has also worked on conservation in conjunction with many NGO African Parks.

7. Shailene Woodley – one of the most widely recognised celebrities for her social and environmental contributions

Famous actress Shailene Woodley is an inspiring environmental activist who regularly advocates for the environment’s protection.

Woodley partnered with the most significant environmental NGO and served as a Green Peace Ocean Ambassador to promote its aim of combating plastic pollution.

It’s fair to say that she is very committed as she has even been arrested for her environmental efforts.

Actor Mark Ruffalo is an outspoken climate activist who helped to found the Solutions Project and Water Defense, whose aim is to support a healthy planet.

In 2016, Ruffalo produced and narrated a documentary titled “Dear President Obama”, in which he took the president to task on the issue of fracking.

Elon Musk is a fan of sustainability applied to the business world as the co-founder of Tesla has regularly put his money where his mouth is by investing in projects that use electricity from renewable sources.

He has also announced that he would not stop anyone from using Tesla Motors patents to develop electric vehicles.

4. Jane Fonda – a climate activist who appeals to the older demographic

Being such a famous personality, Jane Fonda has successfully used her platform to interact with her enormous fan base to spread awareness of the climate crisis and how best to tackle it.

3. Leonardo DiCaprio – set up his own foundation, which runs more than 35 conservation projects

Leonardo DiCaprio has always been a tremendous environmental activist. The Leonardo DiCaprio Foundation was initially set up in 1998 and has successfully run more than 35 conservation projects to complete its mission of protecting the earth.

He has also produced many documentaries to raise awareness of these important environmental issues.

2. David Attenborough – has spent his whole life raising awareness of the natural environment

David Attenborough has been a feature on tv for many decades thanks to his famous nature documentaries.

These programs have always helped to raise awareness of the natural environment, and in recent years Attenborough has intensified his advocacy by speaking at many important UN-sponsored climate talks.

1. Greta Thunberg – perhaps the most famous environmental activist in the world currently

In first place on our list of the top ten inspiring celebrity activists leading the climate change fight is Greta Thunberg.

She is perhaps the most famous environmental activist in the world as she rose to fame at thirteen years old thanks to her emotional and passionate speech.

Ever since she has become a popular figure in the climate change fight and an inspiration to young people worldwide.