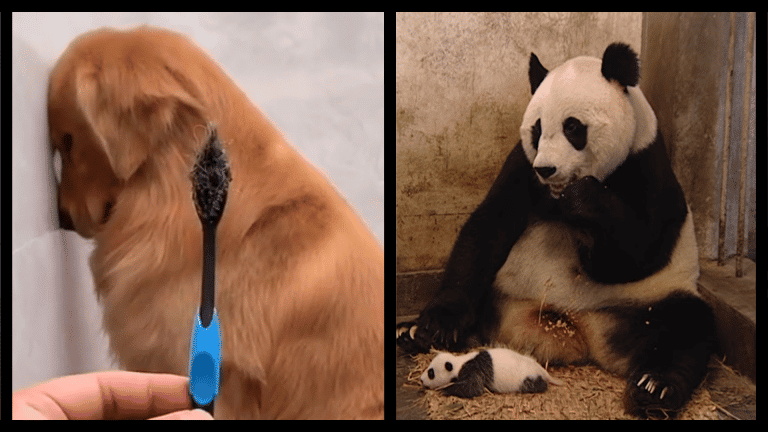 Sometimes when you need a little pick me up, funny animal videos are the best thing for it. Let’s take a look at some of our favourites.

Funny animal videos have the ability to instantly change your mood, and today we’re going to share with you ten of our favourite ones.

Domestic animals, like cats and dogs, have such pure hearts and good intentions, and they can almost always lift our spirits. Most of the time, it’s unintentional!

Wild animals are strong and hearty, but they are also adorable and crazy and have brought us some of the funniest animal videos the internet has seen.

So, if you need a mood boost or just fancy laughing at videos of adorable dogs, elephants, and more, take a look at these funny animal videos to brighten your day.

This video will brighten anyone’s day. When this little pupper gets caught out, full musical statue mode kicks in. If I stay completely still… they’ll never suspect me.

9. An unlikely friendship – he didn’t do his job, and we’re here for it

If rats give you the heeby jeebies, then this video might not be for you. However, this hilariously unlikely friendship just warms our hearts.

The cat was supposed to get rid of the rats in the garden, but instead, he made an unlikely friend. This one makes us laugh but also makes us cry, just a little.

8. Who is the smart one here? – silly friends

Which of these dogs is the smart one? This is one of our favourite funny animal videos because the poor dog on the right is such a smart cookie.

However, she just didn’t quite follow through with this great idea. At least her friend is reaping the rewards!

7. When you’re the quiet one in the group – this dog has had enough

Huskies are notoriously vocal dogs. However, this golden retriever has had just about enough of their singing. It’s his facial expression as they are howling away that really gets us.

6. Baby elephant – the struggle is real

Apparently, elephants aren’t able to properly control their trunks until around one year old!

This little cutie is obviously struggling to get to grips with it! This funny video of a baby elephant is sure to brighten your day.

This video is absolutely hilarious. Anyone with a dog will recognise their guilt instantly!

Sometimes, when you come home from work and aren’t immediately greeted by them, you start to wonder, what have they done?!

4. Birds of Paradise mating dance – all that bravado

This mating dance from a Bird of Paradise on David Attenborough’s Planet Earth is one of our favourite funny animal videos.

Unintentionally hilarious, this bird is trying to impress the females with his mating dance. He first clears the space and, in the end, makes quite the impression with all the feather-waving and impressive dance moves!

An oldie but a goody, this sneezing panda video reminds us of the dawn of internet browsing, long before the age of influencers.

In a simple, classic video, this little baby panda scares his mum with a high-pitched, unexpected shriek of a sneeze.

2. The world’s happiest animal – the quokka

An animal native to Australia, the quokka is known as the world’s happiest animal. People often take the most hilarious selfies with these adorable creatures because they actually smile for pictures!

This compilation displays their cuteness perfectly, and if it doesn’t lift your spirits, we just don’t know what will.

This video is one of the funniest animal videos on the internet. It took the internet by storm upon its original release.

One mans video of a field of deer takes an unexpected twist when Fenton the Labrador comes running through to chase the red deer in Richmond Park in London.

So, there you have it.

Loca the pug is one of the original funny animal videos. She was an Irish dog who had a harmless brain condition that meant she struggled to run without toppling over.

Her owners celebrated her condition across many videos. We love Loca!

The dog who loves bacon

Another classic, this dog, who just loves bacon, stole the hearts of people around the world. The audio and the dog’s expressions work so well together.

Another great video from Planet Earth, but this time, the birds band together! Why can’t human mating rituals be this interesting?

Where can I find the latest funny animal videos?

What is the most viewed dog video on the internet?

This classic video of the husky saying ‘I love you’ is one of the most viewed dog videos on Youtube.

How can these videos brighten your day?

Laughing can literally brighten your day by making you feel a little bit better, both emotionally and mentally. If you’re feeling down, these videos can give you the little boost you might need.